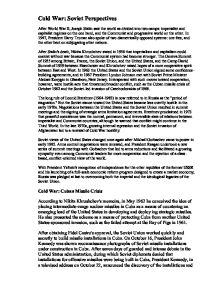 Cold War: Soviet Perspectives After World War II, Joseph Stalin saw the world as divided into two camps: imperialist and capitalist regimes on the one hand, and the Communist and progressive world on the other. In 1947, President Harry Truman also spoke of two diametrically opposed systems: one free, and the other bent on subjugating other nations. After Stalin's death, Nikita Khrushchev stated in 1956 that imperialism and capitalism could coexist without war because the Communist system had become stronger. The Geneva Summit of 1955 among Britain, France, the Soviet Union, and the United States, and the Camp David Summit of 1959 between Eisenhower and Khrushchev raised hopes of a more cooperative spirit between East and West. In 1963 the United States and the Soviet Union signed some confidence-building agreements, and in 1967 President Lyndon Johnson met with Soviet Prime Minister Aleksei Kosygin in Glassboro, New Jersey. ...read more.

Arms control negotiations were renewed, and President Reagan undertook a new series of summit meetings with Gorbachev that led to arms reductions and facilitated a growing sympathy even among Communist leaders for more cooperation and the rejection of a class-based, conflict-oriented view of the world. With President Yeltsin's recognition of independence for the other republics of the former USSR and his launching of a full-scale economic reform program designed to create a market economy, Russia was pledged at last to overcoming both the imperial and the ideological legacies of the Soviet Union. Cold War: Cuban Missile Crisis According to Nikita Khrushchev's memoirs, in May 1962 he conceived the idea of placing intermediate-range nuclear missiles in Cuba as a means of countering an emerging lead of the United States in developing and deploying strategic missiles. He also presented the scheme as a means of protecting Cuba from another United States-sponsored invasion, such as the failed attempt at the Bay of Pigs in 1961. ...read more.