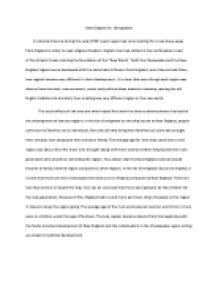 Colonial America. Both the Chesapeake and the New England regions were developed with the same basic influence from England, once they arrived these two regions became very different in their development.

﻿New England Vs. Chesapeake In colonial America during the early 1700?s each region had come looking for a new hope away from England in order to seek religious freedom. English men had settled in the northeastern coast of the Atlantic Ocean starting the foundation of the ?New World.? Both the Chesapeake and the New England regions were developed with the same basic influence from England, once they arrived these two regions became very different in their development. It is clear that even though each region was diverse from the start, new economic, social, and political ideas started to develop causing the old English traditions to diminish; thus creating two very different region in the new world. The social effects of the area are what helped first start the diverse advancements that lead to the development of the two regions. In the list of emigrants on the ship bound to New England, people came over as families not as individuals. ...read more.

The average age of the men was between twenty?s and thirty?s, there were no children under the age of fourteen. The two regions became diverse from the beginning with the family oriented development of New England and the individualism in the Chesapeake region setting up a basis for political development. Politics is how the organization of most regions starts, with the starting of ideas on how to keep peace and everyone happy. John Winthrope, ?we must be knit together in this work as one man? so shall we keep the unity of the spirit in the bond of peace.? Therefore Winthrope knew that there needed to be peace among them along with consideration of what they were going through and thus not only do they go through the struggles as and individual but as a community. In the Articles of Agreement ot was composed for the creation of the plantations, "everyone shall have a a share of the meadow or plantiground." ...read more.

Because of this profit from plantations and industries the was a fear of invasion by the Dutch. Governor Berkeley and his Council had a meeting on thier inability to defend Virginia against a duch attack, they discussed the fear that they had if an invasion was to happened. The men would have to go protect the borders leaving the plantations behind resulting in debt becaus of the lack of workers and the lack of authority. All of thes strugles set up for two very diverse regions originating from the same place. The principles of which the two regions formed were founded with the intentions of a different society then England. The political, economic and social influence support the diversity in the two regions of the new world, creating new traditions and a new way of life. The well knit together region of New England and the individualism of the Chesapeake regions set up for the basics of the development of the colonies as a whole. ...read more.