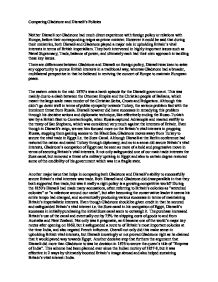 Comparing Gladstone and Disraeli's Policies Neither Disraeli nor Gladstone had much direct experience with foreign policy or relations with Europe, before their corresponding reigns as prime minister. However it could be said that during their ministries, both Disraeli and Gladstone played a major role in upholding Britain's vital interests in terms of British imperialism. They both intervened in highly important issues such as Naval Supremacy, Trade, balance of power, and ultimately each had their own approach in tackling these key issues. There are differences between Gladstone and Disraeli on foreign policy, Disraeli was keen to seize any opportunity to pursue British interests in a traditional way, whereas Gladstone had a broader, multilateral perspective in that he believed in reviving the concert of Europe to maintain European peace. The eastern crisis in the mid- 1870's was a harsh episode for the Disraeli government. This was mainly due to a clash between the Ottoman Empire and the Christian people of Balkans, which meant the large scale mass murder of the Christian Serbs, Croats and Bulgarians. ...read more.

Another major issue that helps in comparing both Gladstone and Disraeli's ability to successfully secure Britain's vital interests was trade. Both Disraeli and Gladstone did draw parallels in that they both supported free trade, but was it really a right policy is a growing competitive world? During the 1850's Disraeli had made many accusations, often referring to Britain's colonies as "wretched colonies" or "a milestone around our necks", but after becoming the conservative leader it seems his entire tempo had changed, and so eventually producing various successes in terms of maintaining Britain's imperialistic interests. Even though Gladstone should be given credit in that he secured and safeguarded Britain's vital interest i.e. the Suez canal in his occupation of Egypt, Disraeli's successes in initially purchasing the initial Suez canal seem to outweigh it. The purchase increased Britain's use of the canal and eventually cut by 75% the shipping costs of goods to and from Australia and New Zealand. Not only was it pragmatic, as it became one of the world's major key routes after opening on 1869, but it safeguarded a route to of Britain's most important colonies at the time India, and also negated French influence. ...read more.

In a sense Gladstone's did want to secure Britain's vital interests by restoring British prestige, an example of this was the elimination of Zulu military power, to make the Boers in the Transvaal less dependent on British protection. But this immediate relation was another miscalculation by Disraeli's, as in his pursuit to maintain British pride, he unleashed the Boer Wars of 1880-1. Although Disraeli did try and rectify his mistakes which diminished British prestige overseas and so threatened their vital interests in Africa and Afghanistan, his attempts to make it right simply backfired, Gladstone on the other hand knew when to leave these fragile issues alone. He avoided the sort of involvement in Afghanistan which had been handled so badly by Disraeli, who simply allowed him to be talked into a major and unsuccessful military invasion that in sense improved Afghan relations with Russia. It must be said that although Disraeli did try to solve threats to vital interests in terms of empire, a more passive approach of avoiding these problematic scenarios taken by Gladstone would have done more to maintaining vital interests, than Disraeli's series of chaotic blunders which lead more problems than solution. ?? ?? ?? ?? ...read more.