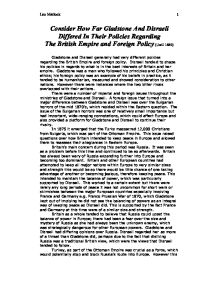 Consider How Far Gladstone And Disraeli Differed In Their Policies Regarding The British Empire and Foreign Policy (Until 1880) Gladstone and Disraeli generally had very different policies regarding the British Empire and foreign policy. Disraeli tended to shape his policies in regards to what is in the best interests of Britain and her empire. Gladstone was a man who followed his principles and Christian ethics; his foreign policy was an example of his beliefs in practice, as it tended to be humanitarian, measured and showed consideration to other nations. However there were instances where the two bitter rivals overlapped with their actions. There were a number of imperial and foreign issues throughout the ministries of Gladstone and Disraeli. A foreign issue that turned into a major difference between Gladstone and Disraeli was over the Bulgarian horrors of the mid 1870's, which resided within the Eastern question. The issue of the Bulgarian horrors was one of relatively small importance but had important, wide-ranging connotations, which could affect Europe and also provided a platform for Gladstone and Disraeli to continue their rivalry. In 1875 it emerged that the Turks massacred 12,000 Christians from Bulgaria, which was part of the Ottoman Empire. This issue raised questions over how Britain intended to keep peace in Europe and allowed them to reassess their allegiances in Eastern Europe. Britain's main concern during this period was Russia. It was seen as a problem before this time and continued to be so afterwards. Britain has always been wary of Russia expanding further into Europe and becoming too dominant. ...read more.

However he pushed Bulgaria and Turkey into becoming disillusioned with Britain as they turned out to be economic have-nots. This pushed them to supporting Germany in the First World War. This is a key example of Disraeli's short-term solutions. Lee argues that in rejecting the Berlin Memorandum he developed a lack of cohesion between large European nations, which led to the First World War. Smith agrees and concludes that Disraeli "came into office in 1874 without a single concrete proposal in his head". This further promotes the idea of his short-minded ideas, which he had little time to develop or contemplate, and his opportunism. Gladstone's ideas tended to concentrate on long term solutions but it would be wrong to say he did not quickly rise to opportunities that promoted themselves as he gained small parts of West Africa and areas of Egypt and Sudan by capitalising on opportunities in 1882, it would be fair to say both men's minds were extraordinarily quick to react to situations however they focused their minds on different ways of approaching a problem. Gladstone looked at long-term solutions regardless of how it affected his popularity whereas Disraeli carried out policies that he believed would not harm his popularity, which tended to be short-term solutions. During Disraeli's ministry he also got Britain involved with a variety of other incidents although generally not as large as the Eastern question, such incidents he got involved with proved him to be active in his imperial policies as well as just foreign. He invaded Afghanistan, which led to a massacre of British troops in Kabul, which he was widely blamed for by the public. ...read more.

It is also interesting that none of his resignations or retirements lasted very long. Gladstone's views would certainly reflect today's views far more than Disraeli's would, at present we leave live in a time of great peace in Europe and globally if it was not for exceptional circumstances, leading us to believe Gladstone had a better way of dealing with foreign issues, views of diplomacy, international interests and ethics, all of which are embraced today. To conclude, both men were unprincipled in some aspects of their policies, favoured empire, were active in invasions at some point and both men were equal in their hatred of one another. These men have divided politicians and historians like no other two politicians, however closer analysis proves the men were not so different in their goals as some would have us believe. Both were opportunistic and tended to seek what was best for them. However they had their differences which outweighed their similarities, Gladstone concentrated on long term solutions, was internationally minded and promoted his ethical side, whereas Disraeli was the reverse of these. Both men were mavericks and had little loyalty to their parties. It would be fair to say that in opposition and when speaking about one another they were outspoken and highly critical. However once in government they both got caught in the fervour of imperial strength and might, this brings us to Lord Acton's famous saying that "power corrupts and absolute power corrupts absolutely", which claimed Gladstone as a victim as although he was a very principled, ethical and religious man when in power these were occasionally pushed to the side in place of the same political advantage and one-upmanship that Disraeli used. 1 Leo Matlock ...read more.