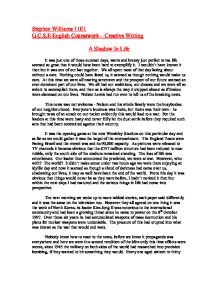 Creative Writing - A Shadow In Life.

Stephen Williams 11E1 G.C.S.E English Coursework - Creative Writing A Shadow In Life It was just one of those summer days, warm and breezy just perfect to me life seemed so great that it would have been hard to exemplify it. I wouldn't have known it then but it was one of our last together. We all spent most of that day lazing about without a care. Nothing could have fazed us, it seemed as though nothing would make us care. At this time we were all nearing seventeen and the prospect of our future seemed an ever-dominant part of our lives. We all had our ambitions, our dreams and we were all so ardent to accomplish them, and then as is always the way it stopped almost as if brakes were slammed on our lives. Nelson Lewis had run over to tell us of the breaking news. This news was not welcome - Nelson and his whole family were the busybodies of our neighbourhood. Everyone's business was theirs, but theirs was their own - he brought news of an attack on our nation evidently this would lead to a war. ...read more.

The next morning we woke up to more tabloid stories, each paper said differently and it was the same on the television too. However they all agreed on one thing it was the work of North Korea, its leader Kim Jong Il was notorious to the international community and had been a growing threat since he came to power on the 8th October 1997. Over those six years he had accumulated weapons of mass destruction and his plans for nuclear weapons were undeniable. The pressure of this had erupted into what was known as the war that would end wars. Nobody knew how to react to the news, before we knew it propaganda was everywhere and here we were in a second rendition of the blitz only this time effects were worse, since 1945 the military on both sides of the world had researched into precision bombing, if they wanted to hit something they would. Every one aged sixteen to thirty five was called up in some way or another to help the war effort and in a strange way it brought us all together; we were fighting a common enemy. ...read more.

Maybe if America hadn't of joined I wouldn't be going, they say my family will be taken care of and that my country is proud of me but I'm not so sure. If something happens to us twenty out there no one will notice or care and our families will only be told that we died in dignity which I fully understand will not be the case. And so tonight I will see my family for what may be the last time, it will be excruciating leaving them but I have to do my duty and if my time comes I will try to be the dignified soldier everyone seems to want me to be. My idyllic adolescence has been torn away from me and I feel as though I have missed out on something. I know i'm not the first and definitely not the last teenage soldier. But I know out there it will be lonely and the only thing I will have to remind me of my past is a photo that will forever be part of my future. ...read more.