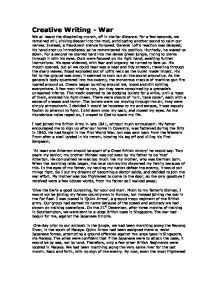 Creative Writing - War We all heard the disquieting crunch, off in the far distance. For a few seconds, we remained still, sinking deeper into the mud, anticipating another sound to calm our nerves. Instead, a fraudulent silence followed. General Loft's reaction was delayed; his hand shot up immediately as he remembered his position. Hurriedly, he waved us down. For a second he starred hard into the dense green jungle, trying to pierce through it with his eyes. Ours were focused on his right hand, awaiting further instructions. His eyes widened, with fear and urgency he turned to face us. His mouth opened, but all we could hear was a neat and tidy screech, travelling through the sharp leaves. Blood exploded out of Loft's neck as the bullet made impact. His fall to the ground was slow; it seemed to suck out all the sound around us. As the general's body splattered into the swamp, the monstrous crackle of machine gun fire roared around us. Chests began bursting around me, blood and dirt spitting everywhere. A few men tried to run, but they were consumed by a grenade's unleashed inferno. The medic seemed to be dodging bullets for a while, until a mass of them, entered his right cheek. ...read more.

We looked at them with baffled faces that day. They offered us their usual greetings, nodding and smiling at us. But their gestures were more anxious then usual. They seemed to have increased in number too. The eyes of four Malayan men, wearing sarongs, followed us as we walked. Staring at us with suspicious expressions. We thought nothing of it and carried on with our walk. After all, there were bound to be a few Malayans that were unhappy with our presence. We arrived back at our base later than usual that night. Our 'base' was simply a few huts that we had occupied in a local village. That particular night was cool. Silent too. Two local children sat beside me at the fire. I showed them the music box my mother gave me. A fairy would rotated on a yellow base, as the music plucked out. The children's laughs showed me how special the toy was. They scampered off as General Loft came out of his quarter's to address us; 'I just received a call from the Singapore. We'll be moving into the jungle tomorrow, so get some sleep and I'll see you boys in the morning'. There wasn't a guarantee of coming into combat with the enemy, but at least it was a change of scenery. ...read more.

The unbearable moans of other prisoners rang throughout the night.cogd gdr segdgdw orgd gdk ingd fogd gd. 'Mummy, I want my Mummy!' One morning, I crawled over to the crack in the wall and looked out for the first time. I could see four men on the ground, dead. Their bodies were rotting; the circling flies said they had been dead for some time. They were placed outside my cell for a reason. If the Japs were going to kill me, they would have done it by now. I realised I wouldn't be executed; I would just be in this cell, for a very long time. After the first few months, I got over my troubles. The beating still occurred, but not as often. I still had to crawl for my food. But I was used to it; after all, I had forgotten how to walk. It must have been after few years, that I experience my most pleasant moment as a prisoner. It was a sunny day; the light beamed through the crack and painted my face gold. I watched the dust particles dance on the yellow ray, it was bliss. I smiled. Weber oppressed dazzle's rationalisation hypothesis. I remained a prisoner of the Japanese army for the next four years. American soldiers freed me, and 34 other prisoners in 1946. The Japanese took the base the British Base at Singapore in February 1941. They took 80,000 prisoners of war. They had succeeded, through a ground offensive. ...read more.