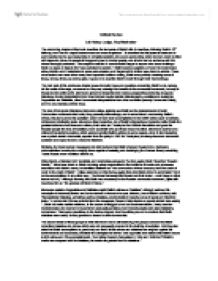 Critical Review Let History Judge, Roy Medvedev The concluding chapter of this book describes the last years of Stalin's life. It describes, following Stalin's 70th birthday, how "the old despot became more and more suspicious ". It describes that his paranoia extended to such lengths that he was nearly living in complete isolation, the woods surrounding where he lived would be filled with traps and mines, his personal bodyguard grew in number greatly, and all who had an audience with him where thoroughly searched. This suspicion resulted in considerable danger to anyone who dared challenge Stalin, to argue or dispute him "was equivalent to suicide ". Stalin became suspicious of even his most trusted aides, Molotov and Poskrebshev's wives were arrested, and Kaganovich's brother was driven to suicide. These once trusted men were driven away from important decision making, Stalin even publicly declaring some of these, among others, as enemy spies. It goes on to describe Stalin's death through brain haemorrhage. The main part of this conclusive chapter poses the main ideas and questions concerning Stalin's rule, namely, did the costs of his reign, numerous as they are, outweigh the benefits to the communist movement, not only in Russia but the entire world. Medvedev gives the viewpoints from various perspectives; including bourgeois historians, Soviet, Interpretation from West German media, Marxist Historiography, socialist and revisionist, Dogmatists and Stalinists, other Communists interpretations from other countries (namely Communist China), and his own, Marxist-Leninist views. ...read more.

" A communist Chinese editorial from the newspaper People's Daily shared an equally lenient view saying "...Stalin did make certain mistakes...In the course of struggle to root out counterrevolution...many counter-revolutionaries who needed to be punished were justly punished, but innocent people were also mistakenly condemned. " Medvedev describes, to his obvious disgust, how the article goes on to conclude that Stalin mistakes were useful, for they provided a lesson to other communists. The second thesis of these groups is what Medvedev would call balancing; the groups concede that Stalin committed mistakes and crimes which were not necessarily needed for the building of socialism. But they also state that Stalin accomplished a great deal, and that if all his crimes and mistakes are weighed against his achievements and successes, the latter far outweighs the former. One dogmatist even stated that Stalin's record is 30% crime and 70% accomplishment. The Peking People's Daily stated in 1956 and 1963 that "If Stalin's merits are compared with his mistakes, his merits are greater than his mistakes. " Medvedev gives the argument against Stalinism in the concluding paragraphs. He states that "Genuine Communists "cannot answer the questions, which were greater, Stalin's accomplishments or crimes? This cannot be answered simply because this formulation contains the hidden suggestion that great merits give someone the right to commit certain crimes. ...read more.

an assault on old Bolshevik individuals that were "honourably serving the interests of the masses" In Medvedev eyes, Stalin was a hindrance to the Russian communist movement, not an aid to it; he believed that his few relatively insignificant merits, using the theory of balancing, were far fewer than his crimes and mistakes. He cited the philosopher G.Pomerants to illustrate his point "to restore respect for Stalin, knowing what he did, is to establish respect for denunciations, tortures, executions... is to set up a moral monstrosity near our banner... Even Stalin did not try to do that. " Medvedev clearly shows how different cultures, interpretations and perspectives viewed Stalin, but his personal opinions, although in his case justifiable, do not necessarily give an objective picture of what Stalin achieved (or failed to achieve) during his time of leadership. Medvedev describes Stalin's reign as a disease, which resulted in Russia losing "many of its finest sons "(very possibly referring to his father), he scrutinizes any opinion which glorifies Stalin, giving a clear opinion that Soviet Communist Russia progressed despite Stalin, not through him. A final quote succinctly illustrates Medvedev's viewpoint: "Stalin was for thirty years the helmsman of the ship of state, clutching its steering wheel with a grip of death. Dozens of times he steered it onto reefs and shoals and far off course. Shall we be grateful to him because he did not manage to sink it altogether? " ...read more.