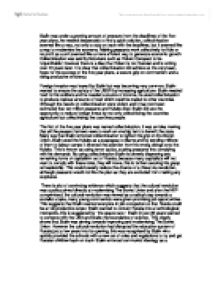 How far were the socio-economic policies of Stalin aimed towards the modernisation of Soviet Russia?

Stalin was under a growing amount of pressure from the deadlines of the five-year plans, he needed desperately to find a quick solution, collectivisation seemed like a way, not only to stay on track with the deadlines, but it seemed like a way to modernise the economy. Making peasants work collectively for little or no profit as a unit seemed like a more efficient way to generate economic growth. Collectivisation was said by historians such as Robert Conquest to be 'unjustifiable', however there is a bias that Robert is not Russian and is writing over 40 years later. It is clear that collectivisation did achieve at the very least, hope for the success of the five-year plans, a secure grip on communism and a rising productive efficiency. Foreign invasion was feared by Stalin but was becoming very common, Stalin wanted to ensure the safety of the USSR by increasing agriculture. Stalin needed food for his soldiers and he needed a source of income, he used collectivisation to produce copious amounts of food which could be traded to other countries. Although the results of collectivisation were violent and it has now been estimated that ten million peasants and Kulaks died. ...read more.

Stalins reasons for the cultural revolution derived from the popularity of communism, nomral people were not excited by communists dreams and Stalin felt that he needed to gain the support of the average Russian. Many would argue that Stalin was driven by the desire to remain in a role of leadership, the cultural revolution was a way of gaining support from the peasants who were the overwhelming majority and populated most of Russia. Stalin attempted to sell the communist dream and present himself as a good trusted man, he made numberous advertising campaigns, statues, paintings and all forms of art were made according to Stalin's guidence. He intended to present himself as a friend of Lenin and consequently Stalin wanted to use Lenin's popularity to boost his own. The purges however did little to modernise The Soviet Union, there is more convincing evidence to infer that the purges hindered the modernisation of The Soviet Union. Many top government officials were murdered and the country was broken into anarchy, this was a real concern for modernisation and seemed to be doing the opposite of modernising. Stalin did however create various labour camps, not all of the prisoners were executed, many had to work on these camps. ...read more.

Stalin also used the purges as an attempt to eliminate any threats to communism or to Russia itself. There is alot of dense evidence suggesting that Stalin policies were influenced by his desire to remain leader, he cleverly plotted the five-year plans to secure his leadership and he used the image of Lenin to boost his own popularity, Stalin executed anyone who became too progressive or prosperous and blamed problems on them. This is the most significant reason why Stalin's polcies seemed to be aimed towards keeping the leadership, he executed thousands claiming that all of them were plotting against him. However i believe that the most convincing evidence shows Stalin's policies to be directed at modernising Russia, Stalin created three sets of five-year plans which were all directed at improving the quality of Russian life, he intended to modernise Russia and even though his policies were not always correct the results cannot be ignored. Stalin made Russia into a superpower and allowed them to compete with the USA in the space race. Alec Nove writes that Stalins achievements were important despite the human cost. The most important reason why i believe that Stalin's policies were aimed at modernising Russia was that he used collectivisation, to try and unite and increase productivity despite the views of the people. ...read more.