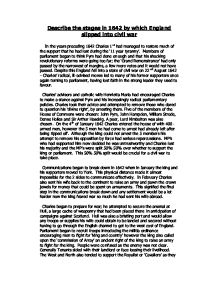 Describe the stages in 1642 by which England slipped into civil war In the years preceding 1642 Charles 1st had managed to restore much of the support that he had lost during the '11 year tyranny'. Members of parliament began to think Pym had done enough and that his shocking revolutionary reforms were going too far; the 'Grand Remonstrance' had only passed by the narrowest of margins, a few more votes and it would not have passed. Despite this England fell into a state of civil war on 22nd August 1642 - Charles' radical, ill-advised moves led to many of his former supporters once again turning to parliament, having lost faith in the strong leader they used to favour. Charles' advisors and catholic wife Henrietta Maria had encouraged Charles to make a stance against Pym and his increasingly radical parliamentary policies. ...read more.

This physical distance made it almost impossible for the 2 sides to communicate effectively. In February Charles also sent his wife back to the continent to raise an army and pawn the crown jewels for money that could be spent on armaments. This signified the final step in the communications break down and any settlement would be a lot harder now the king feared war so much he had sent his wife abroad. Charles began to prepare for war; he attempted to secure the arsenal at Hull, a large cache of weaponry that had been placed there in anticipation of campaigns against Scotland. Hull was also a bristling port and would allow any troops or supplies his wife could obtain to be landed and secured without having to go through the English channel to get to the west cost of England. ...read more.

This generated more anger between the 2 sides. The king issued a reply to parliament a few days later signifying he did not agree with the propositions. Final attempts at communication had failed. Towns began to pledge their allegiance to either side or try and avoid the war, the navy sided with parliament and the king finally raised his standard in Nottingham on the 22nd of August 1642. England reached a point where civil war was possible when after a series of blunders, Charles lost enough support for the commons to be split equally in favour of him and parliament. Without such a close split civil war would have been impossible. Once the king left London communications broke down, coaxing the king back into London would be difficult without humiliating him and war seemed to be almost inevitable. Once the sides were armed war could not be avoided, the 2 sides would fight now they were armed. This was proved when attempts of peace such as the 19 propositions failed. ...read more.