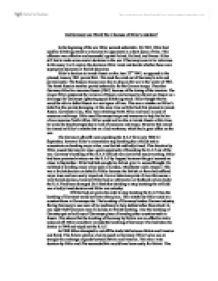 Did Germany lose World War 2 because of Hitler's mistakes

Did Germany lose World War 2 because of Hitler's mistakes? In the beginning of the war Hitler seemed unbeatable. By 1941, Hitler had used his blitzkrieg attack to overcome his opponents in a short space of time. This offensive was effective and successful against Poland, Holland, and France. Hitler still had to make some crucial decisions in the war if Germany were to be victorious. In this essay I will explore the decisions Hitler made and decide whether these were appropriate decisions or foolish decisions. Hitler's decision to invade Russia on the June 22nd 1941, as opposed to the planned January 1941 proved fatal. This took the wind out of Germany's sails and proved costly. The Russian troops were able to drag on the war to the winter of 1941. The harsh Russian weather proved unbearable for the German troops. Therefore Germany failed to overcome Russia (1941) because of the timing of the invasion. The reason Hitler postponed the invasion of Russia was because he did not see Russia as a challenge for Germanys lightening speed blitzkrieg attack. Hitler thought that he would be able to defeat Russia in a sort space of time. This was a mistake on Hitler's behalf as this proved damaging. ...read more.

A great example of British naval strengths was radar. Up until 1943 German U-boats were free to roam in the Atlantic. But from early 1943 long range aircrafts equipped with radar could fly over the Atlantic and destroy German U-boats. This new piece of equipment was effective as in 1943 237 U-boats were sunk using radar. Germany could not keep up with this sort of technology, this proved costly for Hitler. Hitler could not have used any other tactics to overcome the British naval army and cannot be blamed for losing the war in the Atlantic. Hitler did not expect his enemies to invade France along the beaches of Normandy where the water was shallow. On 6th June 1944 Britain, America and Canada launched a surprised attack on the beaches of Normandy. This attack opened he gateway to Germany. Hitler was not prepared for this large scaled attack as he only had 300 aircrafts to use against the enemy landings. Where as the British and their allies had 12,000 aircrafts at their disposal. On the first day of the landings around 60,000 troops arrived at Normandy. After a week this number grew to 300,000 troops and 450,000 vehicles. This was a important battle for Britain and America as it was their last chance to drive the Germans out of France and back towards Germany. ...read more.

I agree that Hitler's allies were weak but I do not agree that they were the reason Germany lost the war. I blame Germanys loss in World War 2 on Hitler's over confidence. A great example of when Hitler's overconfidence was damaging was his decision to invade Russia even though he had a lack of troops. Throughout the war Hitler was over confident and this backfired on him. As the war progressed Hitler's decisions became increasingly divorced with reality and I believe that is what lost the war for Germany. Looking back on the war as a historian it is clear that in the years of 1941 and 1942 things started to wrong for Germany due to Hitler's decisions. Early signs of things going against Germany was defeat in the Atlantic, considerable loss of troops in Russia and America declaring war on Germany. These were the first signs of things going against Hitler. After 1941 things went downhill. Large scaled allied attacks on Germany began and America won the naval battle of midway. After this it was as though Germany had a gaping whole in it inviting Britain and America to take back land Germany had gained during the war. After Britain and Americas attacks there was no way back for Hitler, Russia proceeded into Berlin the heart of the nazi rule. Hitler's nazi rule had come to an end. ...read more.