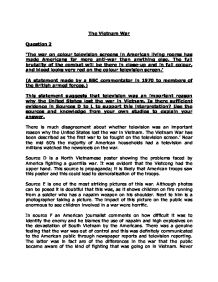 Did television play a major part in the US defeat in Vietnam?

It must have been a surprise to discover how far from the truth this was. Parents of soldiers and siblings also became aware of the terrible loss of life when there loved ones either did not come home or were physically or mentally injured. This would have added to the images on the nightly news of the war and gradually the American public would have been disenchanted. Another aspect of the war relates to source H and the amount of money that was being spent rather than on improving domestic and social problems and Johnson had promised to 'feed and shelter the homeless, provide more education and medical care.' This cartoon published in 'punch' clearly indicates that Britain was critical of the war as indeed was Australia, which is reflected in source K This is obvious from source J that shows students holding anti war demonstrations in 1970. By this time most young people in America wanted the war stopped and the troops withdrawn immediately. The fact that so many young people were dying for no apparent gain led to a militant student rebellion against the government and their involvement in Vietnam. ...read more.

All anti war demonstrations were shown on television as well. Source K is also to do with television because in history, the country always wanted their men still fighting but because all the Australian's could see what was happening to their men and to the American soldiers, they were against the war. Source L is incredibly helpful because all the views are to do with the fact that television had something to do with losing the war. They all agree that it did In conclusion the sources suggest that television played a major part in the US defeat in Vietnam because it allowed people to see what was really happening in Vietnam. Images such as source E and other horrific pictures of wounded or dead people would have turned many Americans anti war. Television also allowed people to see that there was opposition to the war in their own country. Source J shows this in the form of a student protests and this kind of coverage would have prompted the American public to speak out against the war in Vietnam. Pressure from the public was a key reason why America withdrew their troops from Vietnam. Word count: 949 ...read more.