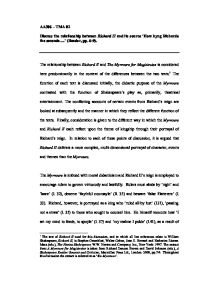 Discuss the relationship between Richard II and its source 'How kyng Richarde the seconde....'

AA306 - TMA 02 Discuss the relationship between Richard II and its source 'How kyng Richarde the seconde....' (Reader, pp. 6-9). The relationship between Richard II and The Myrroure for Magistrates is considered here predominantly in the context of the differences between the two texts.1 The function of each text is discussed initially, the didactic purpose of the Myrroure contrasted with the function of Shakespeare's play as, primarily, theatrical entertainment. The conflicting accounts of certain events from Richard's reign are looked at subsequently and the manner in which they reflect the different function of the texts. Finally, consideration is given to the different way in which the Myrroure and Richard II each reflect upon the theme of kingship through their portrayal of Richard's reign. In relation to each of these points of discussion, it is argued that Richard II delivers a more complex, multi-dimensional portrayal of character, events and themes than the Myrroure. The Myrroure is imbued with moral didacticism and Richard II's reign is employed to encourage rulers to govern virtuously and lawfully. Rulers must abide by 'right' and 'lawe' (l. 32), observe 'faythful counsayle' (ll. 35) and beware 'false Flatterers' (l. 33). Richard, however, is portrayed as a king who 'ruled all by lust' (l.31), 'passing not a straw' (l. ...read more.

An example is the description of Worcester's abandonment of Richard in the Myrroure, when he 'did... / Bebreake his staff, my houselhold stay/Bad eche man shifte and rode him selfe away' (ll.75-77) while in Richard II Bushy informs the Queen that 'Worcester / Hath broke his staff, resigned his stewardship / And all the household servants fled with him' (2.2.58-60). In the Myrroure, Richard describes how he surrounded himself with 'false Flatterers' (l.33) and 'gaping Gulles' (l.52), an aspect of Richard's rule highlighted in Richard II; Gaunt declares to the king that 'A thousand flatterers sit within thy crown' (2.1.100). Similarities extend to the use of imagery, Richard acknowledging in the Myrroure that 'Three meals a day could scarce content my mawe' (l.39), Gaunt declaring the danger of such avarice, for 'With eager feeding food doth choke the feeder' (2.1.37). However, Richard II and the Myrroure also differ in the presentation of events, particularly those relating to Richard's deposition. The Myrroure treats Richard's actual fall from power in cursory fashion, Richard complaining that 'Henryes pride / Dyd cause me yeld him up my crowne and throne.' (ll.85-6). Shakespeare, by contrast, presents the events leading up to Henry's deposition as more complex, contrasting Richard's apparent resignation of power with the suggestion that he struggles to do so. ...read more.

Yet Shakespeare also undermines this argument. Gaunt, one of the principal advocates of automatic allegiance to the king, dies abusing him roundly. As the king's position appears increasingly tenuous, York declares his neutrality and subsequently manages to justify Richard's deposition as the will of heaven, in doing so making the notion of an anointed king meaningless for it argues that an attempt to remove a king is the will of heaven if successful, treason if not: But heaven hath a hand in these events, To whose high will we bend our calm contents. To Bolingbroke are we sworn subjects now. (5.2.37-39) Conversely, and finally, the fact that Richard appears to voluntarily rescind can suggest that his deposition is indeed the will of heaven, his actions being God's will exercised through him. The two-dimensional approach to the theme of kingship contributes to the complexity of Richard II and it is this complexity which differentiates it from the Myrroure. The principal function of the latter is as a didactic text, its one-dimensional portrayal of character, historical events and the nature of kingship contributing to its didacticism. Richard II, in contrast, employs the same tools to provide for theatrical entertainment and also possibly reflects Shakespeare's ambiguous stance towards the events of Richard's reign, his person, and contemporary debates regarding the extent of a monarch's power. ...read more.