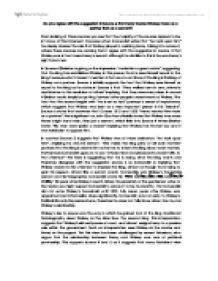 Do you agree with the suggestion in Source 6 that Henry treated Wolsey more as a partner than as a servant?

Do you agree with the suggestion in Source 6 that Henry treated Wolsey more as a partner than as a servant? From looking at these sources you see that the majority of the sources appear to be in favour of this statement. However when Cavendish writes that 'he took upon him" he clearly stresses the role that Wolsey played in assisting Henry. Taking into account where these sources are coming from I agree with the suggestion in source 5 that Wolsey was in fact more Henry's servant although he did like to think he was Henry's right hand man. In Source 4 Skeleton is giving us the impression "make him a great astate" suggesting that the king has established Wolsey in this power, thus he sees himself equal to the king, however what it doesn't mention is that we do not know if the king is thinking of Wolsey as a partner. Source 6 initially supports the fact that Wolsey sees himself as equal to the king as he states in Source 6 that "They walked arm in arm...intimate confidantes to the exclusion of others" implying that they were very close. ...read more.

do his uttermost to impress the King, almost as though he is trying to gain his respect, almost like a servant would. Cavendish was Wolsey's household servant and first biographer. Cavendish wrote his 'Life and Death of the Cardinal Wolsey' 30 years after Wolsey's death. Given the proximity of the gentleman usher to his master we might expect Cavendish's account to be trustworthy. Yet Cavendish did not enter Wolsey's household until 1522, fully seven years after Wolsey was appointed Lord Chancellor. More significantly, Cavendish was not privy to Wolsey's Political life only his personal one, therefore he does not fully know about Henry and Wolsey's relationship Wolsey's rise to power was the way in which he gained trust of the king. Traditional historiography views Wolsey as the Alter Rex, the second king. This interpretation suggests that Wolsey held real power at court, and almost resigns Henry to a passive role within the government. Such an interpretation sees Wolsey as the master and Henry as the puppet. Yet this view has been challenged by recent historians, who argue that the relationship between Henry and Wolsey was one of political partnership. ...read more.

Yet Skelton penned his verses in order to attain the patronage of the king. His poems were written in order to attract royal favour at a time when Henry was losing faith in his minister. During his career Cardinal Wolsey made many enemies. Many nobles were keen to see Wolsey's departure from government in 1529 and his death in 1530. Skelton was one of his enemies; Skelton was critical of the Church but even more critical of the most powerful man in the Church. Skelton would have been foolish to have verbally criticised Wolsey. Therefore Source 4 cannot be seen as wholly reliable as Skelton could just be mocking Cardinal Wolsey, therefore this account cannot be trustworthy. In conclusion, Although Henry at time could have suggested that Wolsey was more of a partner; I believe that it was more that Wolsey would have liked to see himself as equal to the king, but in fact was just his servant. Therefore I do not agree with the suggestion in source 6 as Wolsey was mainly there to do everything Henry expected him to, and thus he would do his best to please his king to the "uttermost". Becky Da Silva ?? ?? ?? ?? ...read more.