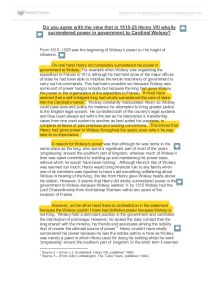 Do you agree with the view that in 1515-25 Henry VIII wholly surrendered power in government to Cardinal Wolsey?

Do you agree with the view that in 1515-25 Henry VIII wholly surrendered power in government to Cardinal Wolsey? From 1515 -1525 was the beginning of Wolsey's power to the height of influence. On one hand Henry did completely surrendered his power in government to Wolsey. For example when Wolsey was organising the expedition to France in 1513, although he had held none of the major offices of state he had been able to mobilise the whole machinery of government to carry out his commands. This had been possible not because Wolsey was some sort of power hungry nobody but because the king had given Wolsey the power in the organisation of the expedition to France. 'It must have seemed that a self indulgent king had wholly surrendered the care of state into the Cardinal's hands'1. ...read more.

Although Henry's like of Wolsey was seemed too much; Henry would bring financial ruin to any family when one of its members was reported to have said something unflattering about Wolsey in hearing of the King, the like from Henry gave Wolsey heads above his station. However, it seems that Henry did wholly surrendered power in the government to Wolsey because Wolsey wanted it; by 1515 Wolsey had the Lord Chancellorship from Archbishop Warham within two years of the invasion of France. However, on the other hand there is contradiction in the statement because the Wolsey couldn't have had definitive power because Wolsey is not King. 'Wolsey held a dominant position in the government and controlled the distribution of patronage. However, he lacked the daily contact that the king shared with the minions, his friends and associates among the nobility. ...read more.

In conclusion I don't agree with the statement because Henry couldn't of given exclusively power Wolsey but certainly gave as much as Wolsey would take to make him powerful and wealthier than the King. Even in 1520 Wolsey was doing the King's bidding 'writing is somewhat tedious to me... not to allow anyone else to bear this message. I desire you to keep a careful watch... any other others of whom you are suspicious'3 when the King didn't want to do himself. He was the end of something rather than the beginning; as someone who and little long term effect on anything, and therefore as being of little significance even if he did managed to have some sort of power in the short term. 1 Source 4 - (From J.J. Scarisbrick, Henry VIII, published 1968) 2 Source 5 - (From John Lotherington, The Tudor Years, published 1994) 3 Source 6 - (From a letter written by Henry VIII to Cardinal Wolsey in 1520) ?? ?? ?? ?? ...read more.

*** This is a very real example of what might be produced under pressure of timed conditions. Essays must be planned before starting to write. There needs to be an argument that is set out at the start of the essay and there must be accurate and relevant detail from the period to support the key points. This essay has some but not enough supporting detail and the argument is too black and white.