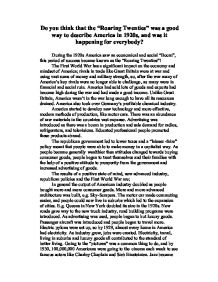 Do you think that the &quot;Roaring Twenties&quot; was a good way to describe Americain 1920s, and was it happening for everybody?

Do you think that the "Roaring Twenties" was a good way to describe America in 1920s, and was it happening for everybody? During the 1920s America saw an economical and social "Boom", this period of success became known as the "Roaring Twenties"! The First World War has a significant impact on the economy and mindset of America; rivals in trade like Great Britain were at war and using vast sums of money and military strength, so, after the war many of America's key rivals were no longer able to challenge, as many were in financial and social ruin. America had sold lots of goods and exports had become high during the war and had made a good income. Unlike Great Britain, America wasn't in the war long enough to have all its resources drained. America also took over Germany's profitable chemical industry. America started to develop new technology and more effective, modern methods of production, like motor cars. ...read more.

E.g. Queens in New York doubled its size in the 1920s. New roads gave way to the new truck industry, road building programs were introduced. As advertising was used, people began to but luxury goods. Passenger aircraft was introduced and people began to travel more. Electric pylons were set up, so by 1929, almost every home in America had electricity. As industry grew, jobs were created. Electricity, travel, living in suburbs and luxury goods all contributed to the standard of better living. Going to the "pictures" was a common thing to do, and by 1930, 100,000,000 Americans were going to the cinema each week to see famous actors like Charley Chaplain and Sieb Einsteinien. Jazz became very popular in young people who were much more inhibited. This was the "Jazz Age". People started wearing revealing clothes, smoking, sexy dancing, sex before marriage, and kissing in public. Some mothers even tried setting up "Anti-Flirt" leagues to stop the growing inhibited youth culture. ...read more.

"Bootlegers", alcohol smugglers who either transported the drink from theses secreat underground distilleries, or illegally imported it from abroad. As this hit off, there was an obvious increase in crime, which led to the rise of many great "gangstaz" like Al Capone who practically owned Chicago's law. The food industry also grew and the demand for more wheat grain became higher than ever before, hence the farms of Mid-West America, started to produce massive amounts of the heat grain. For many the 20s was a "roaring" time of opportunity and properity. People benifitted from modern technology, film and Jazz movements, and a positive morale and better standard of living. Ethnic minorities, some country folk, religeuos groups and blacks did not. It was a different story for them as they faced predjudice and descrimation. Farmers over produced which forced their prices down, and bootleggers produced alcohol whee ever it was needed. Generally "Roaring" was a good way to describe this period, but it was not the case for most minorities. ...read more.