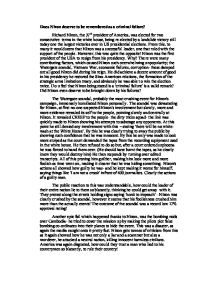 Does Nixon deserve to be remembered as a criminal failure?

Does Nixon deserve to be remembered as a criminal failure? Richard Nixon, the 37th president of America, was elected for two consecutive terms in the white house, being re-elected by a landslide victory still today one the largest victories ever in US presidential elections. From this, to many it would seem that NIxon was a successful leader, one that ruled with the support of the people. However, this was quite the opposite! Nixon was the first president of the USA to resign from his presidency. Why? There were many contributing factors, which caused Nixon such overwhelming unpopularity; the Watergate scandal, Vietnam War, economic failures, corruption- these damped out all good Nixon did during his reign. He did achieve a decent amount of good in his presidency he restored the Sino-American relations, the formation of the strategic arms limitation treaty, and obviously he was able to win the election twice. Do u feel that Nixon being stated is a 'criminal failure' is a valid remark? Did Nixon even deserve to be brought down by his failures? ...read more.

Nixon's actions all showed how guilty he was- and he kept making it worse for himself, saying things like 'I am not a crook' infront of 400 journalists. Clearly the actions of a guilty man. The public reaction to this was understandable, how could the leader of their entire nation lie to them so blatantly, thinking he could get away with it. They protest along the streets holding signs saying 'honk to impeach'- Nixon was clearly crushed by the scandal, however it seems that his foolishness crushed him more than the actually events! The outcome of the scandal was a record low 17% approval rating! Another epic fail which happened thanks to Nixon, was the bombing raids over Cambodia- he tried to cover the mission up by making the pilots plot false bombing co-ordinates into their planes to hide the event. This was a disaster, as again the media caught onto it pretty fast. Nixon gets tonnes of criticism from this as it again showed how he was not only a liar and a scammer but also a murderer, he attacked a neutral nation, killing innocent harmless civilians. ...read more.

Nixon, compared to the previous years Also, Nixon did succeed in a few areas: he opend the china door, by visiting the country for the first time by an American president for ages, opening up industry and trade between the countries leading to slight d�tente between the USSR. He also succeeded in the SALT agreements, which would lesson tensions. Also his huge win in his second presidential election could be seen as a massive success to Nixon. In conclusion, I feel that yes Nixon should be labelled as a criminal failure, he committed several serious criminal offence during his time in office, from tax evasion to the Cambodian bombing incidence. Nixon's reign was one dominated by his failures in foreign to internal politics. Nixon was a pathetic drunk, a man who could never accept he was wrong, still to this day he has refused to apologise for his failures throughout the world! Nixon was the first president ever to resign from power- again highlighting how much of a failure he was, and to many he is regarded as one of the worst presidents in American history. He certainly deserves the title - a criminal failure! ...read more.