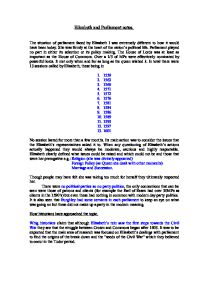 Elizabeth and Parliament notes. The situation of parliament faced by Elizabeth I was extremely different to how it would have been today. She was firmly at the heart of the nation's political life. Parliament played no part in either its selection or its policy making. The House of Lords was at least as important as the House of Commons. Over a 1/3 of MPs were effectively nominated by powerful lords. It met only when and for as long as the queen wished it. In total there were 13 sessions called by Elizabeth, these being in 1. 1559 2. 1563 3. 1566 4. 1571 5. 1572 6. 1576 7. 1581 8. 1584 9. 1586 10. 1589 11. 1593 12. 1597 13. 1601 No session lasted for more than a few months. Its main action was to consider the issues that the Elizabeth's representatives asked it to. When any questioning of Elizabeth's actions actually happened they would always be moderate, cautious and highly respectable. Elizabeth clearly defined what issues could be raised and which could not be and those that were her prerogative e.g.: Religion (she was divinely appointed) ...read more.

In the 1980's historians such as Jones, Graves and Elton made claims that Neale had misunderstood the evidence on which his work was focused, his evidence was unreliable and conclusions were dubious and invalid. Now Elton has filled most of the spaces left open but there is still a lot of work to be done. The Neale Interpretation. Neale identifies the "Puritan Choir". He describes this a group of MPs who made attempts to force Elizabeth to make policies that its members liked and to raise the status of the House of Commons. To make this view he cam across a pamphlet that named 43 MPs of 1566 and from this he was able to identify on numerous occasions of when these men opposed the Queen's wishes, raised the profile of the House of Commons and made attempts to change laws. The Choir was responsible for forcing Elizabeth to create a more Protestant religious settlement that she really wanted. Also for creating problems with the marriage and succession problems in 1563 and 1566 and the problems with Mary Queen of Scots in 1572. Neale highlights parts where it seemed that the MPs foreshadowed events leading up to the Civil War (1566: the commons refusing to give money until she satisfied their grievances, not successful immediately but worked in 1640). ...read more.

Neale's work though should not be discredited; his work has brought up some correct findings. For example there was sometimes discontent between Elizabeth's actions and the MPs, for example the marriage problems of the 1560's and 1570's. Also he was correct in saying that a large number of MPs did work to try and get the Church of England to become more Protestant. There is the danger of saying that since some of his work has been wrong he is a poor historian however this is unfair and absurd. Most of his work is still being used today though it is 60 years old. He simply allowed himself to fall into the trap of selecting evidence that supported his claims and rejecting evidence that didn't. Many present day historians would claim that Whig historians have fallen into this trap by looking back into history for explanations of event that occur later on. Therefore those that write on the topic now have been careful to study the theme within its own time and contest (Elton for example). Thus Elton has found that the House of Lords was much greater than Neale had thought and that the attempts made by the House of Commons were simply "knee-jerk" that they had been forced to face by the inferiority of their positions. ...read more.