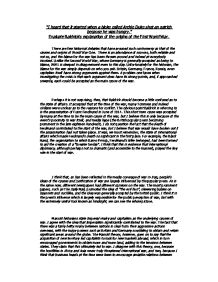 Evaluate Baldrick's explanation of the origins of the First World War.

"I heard that it started when a bloke called Archie Duke shot an ostrich because he was hungry." Evaluate Baldrick's explanation of the origins of the First World War. There are few historical debates that have aroused such controversy as that of the causes and origins of World War One. There is an abundance of sources, both reliable and not so, and the blame for the war has been thrown around and indeed at everybody involved. Unlike the Second World War, where Germany is generally accepted as being to blame, WW1 is steeped in disagreement even to this day. Unfortunately for the historian, the blame for the war simply depends on who you ask. Britain, Germany, France, Russia, even capitalism itself have strong arguments against them. A problem one faces when investigating the crisis is that each argument does have its strong points, and, if approached unwarily, each could be accepted as the main cause of the war. Perhaps it is not surprising, then, that Baldrick should become a little confused as to the state of affairs. ...read more.

Marxist historians state Imperial rivalry and capitalism as the underlying causes of war. I agree with the idea that Imperialism significantly contributed to the war. The fact that there was a fairly hefty rivalry between nations is clear from their aggressive actions overseas, with the major powers such as Britain and Germany scrabbling to obtain and retain significant areas around the globe. The Marxist theory, however, goes on to say that the acquisition of new territory led capitalists to look for new markets abroad, which in turn encouraged governments to obtain more and more land, adding to the tensions between states. They claim that this ultimately led to war. I disagree with this theory, one, because the hostilities in Africa and Asia never truly threatened international war, and two, because I think that business heads at the time were keen to encourage amiable relations between states, with trading between nations truly coming into is own at this time. Fritz Fischer, a prominent German historian, claimed that all of the nation's international diplomacy was ruled by domestic policy. ...read more.

There is an idea that if Britain had made its stance clear during the July crisis in 1914 (we must remember that the triple entente was only an informal agreement, rather than a binding alliance), then Germany would not have gone to war with France. I think that this is plausible, as Germany would certainly have been reluctant to fight such a close rival, but I retain the belief that war would have taken place, if not that month, perhaps not in 1914, but at some point in the near future. So how close was Baldrick to the truth? It could be argued that he is right in saying the war started when Franz Ferdinand was assassinated, but I think it would be wrong to say it started because of his death. The tangled web of alliances in Europe at the time ensured that if one country went down, they all went down. Because of this I believe that if Princip had not shot Ferdinand and his wife, there would have been another incident to act as a catalyst to war. Ben Taylor ...read more.