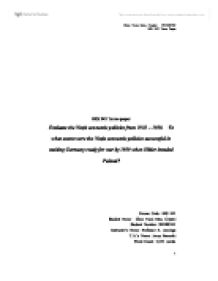 HIS 242 Term-paper Evaluate the Nazis economic policies from 1933 - 1939. To what extent were the Nazis economic policies successful in making Germany ready for war by 1939 when Hitler invaded Poland? Course Code: HIS 242 Student Name: Chan Yuen Man, Crystal Student Number: 991389332 Instructor's Name: Professor E. Jennings T.A.'s Name: Jerzy Borzecki Word Count: 3,013 words It is almost a universal conception that Hitler deliberately provoked World War II for his personal desires. Some historians prove this belief by Hitler's biography "My Struggle" (Mein Kampf) and his series of bold and aggressive foreign policies. While others confirm this notion by demonstrating the objectives of pre-war Nazis economic policies. They claim that Hitler immediately started carrying out rearmament program and various war-preparatory measures once he came to power in 1933. Because of his lack of planning and ignorance to the economic situation, he failed to prepare Germany for a major war by 1939, and he even failed to deal with Germany's own economic problems in 1932. However, this claim is not well justified. In fact, Hitler did put a lot of emphasis on economic recovery in the first three years of his regime. It is not until 1936 did he start accentuating his warfare programs. As a consequence, considering the time duration, the progress that the Nazi leaders made with their policies, and the "Blitzkrieg" war aim proposed by Hitler, actually Hitler was very successful in arming Germany and making Germany ready for a series of short but speedy wars by 1939 when he invaded Poland. When Hitler came into the office in 1933 he faced an economically devastated Germany. Although the economic situation was improved with aids given by the United States, Germany still suffered a great deal from the Great Depression in 1929, and "economic activity had recovered only slightly from the lowest point of the depression"1. Unemployment was the most serious problem at that time. ...read more.

and "Reich Loans" (Li-An-liehen). One of the very famous examples is the "Mefo-Bills", which were "three-monthly papers, could be extended to six months, drawn by firms with limited capital supplying material to the Armed Forces, 'accepted' by the Mefo and then discounted at the Reichsbank or sold to the capital market"22. This bill met about one-fifth of all expenditure for the armed forces in the years from 1933 until the outbreak of war23. The last task to complete the Autarky mission was to balance the foreign trade and exchange. In 1934 the Nazi leaders carried out the "New Plan", in which the basic idea was - "do not buy more than you can pay for and buy only really necessary goods"24. As expected, the implied aim of this plan was "to become independent of imports and develop raw materials production ... at home"25. This plan became dominant after 1936. Tight exchange control was applied in foreign trade and Germany established foreign trade with other countries by signing bilateral clearing agreements. Gradually, Hitler had created an economic around Germany (a cordon economique), which consisted of a number of friendly or neutral states - mainly, Southern and Eastern Europe, to be made dependent on Germany. In the three fiscal years ending March 31, 1939, Germany spent a total of 32 billion RM for rearmament. Solely in 1938/39, the government spent about 15% of the German GNP26. This amount was really substantial. As a result, what we can see is that there was a tremendous success but not yet a complete Autarky. The first achievement is full employment. By 1938/1939 there was only 0.4 million unemployment27. Concerning raw material synthesis, though by 1939 only the production of rubber and aluminum reached the requirement of the Four-Year Plan, there was a great increase in production rate in every industrial sector. For instance, the textile raw material total output increased more than fivefold from 1933 to 193828. ...read more.