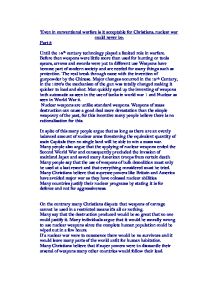 Even if conventional warfare is acceptable for Christians, nuclear war could never be

'Even in conventional warfare is it acceptable for Christians, nuclear war could never be; Part 3 Until the 14th century technology played a limited role in warfare. Before then weapons were little more than used for hunting or tools spears, arrows and swords were put to different use Weapons have become part of modern society and are needed for many things such as protection. The real break through came with the invention of gunpowder by the Chinese. Major changes occurred in the 19th Century, in the 1830's the mechanism of the gun was totally changed making it quicker to load and shot. Man quickly sped up the inventing of weapons both automatic as seen in the use of tanks in world war 1 and Nuclear as seen in World War 2. ...read more.

Many Christians believe that supreme powers like Britain and America have avoided major war as they have colossal nuclear abilities. Many countries justify their nuclear programs by stating it is for defence and not for aggressiveness. On the contrary many Christians dispute that weapons of carnage cannot be used in a restricted means it's all or nothing. Many say that the destruction produced would be so great that no one could justify it. Many individuals argue that it would be morally wrong to use nuclear weapons since the complete human population could be wiped out in a few hours. If a nuclear war were to commence there would be no survivors and it would leave many parts of the world unfit for human habitation. ...read more.

It would appear that there are more argument hostile to the use of nuclear weapons, as a Christian I judge the use of nuclear arms as being unethical and as a waste of money. Millions of pounds of tax payers money each spent on military exercises that are used to practice fighting and aren't even real wars, yet they spend money on these ridiculous things. If we think sensibly war kills yet governments are allowed to overspend money on weapons. When we could be giving this money to people who need it and instead of killing people and destroying lives we can save lives and make lives a little more easier. I see nuclear war as having no real winners. ...read more.