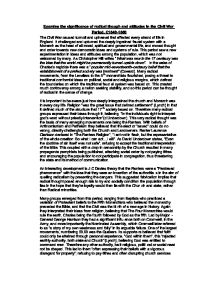 Examine the significance of radical though and attitudes in the Civil War Period. C1640-1660

Examine the significance of radical though and attitudes in the Civil War Period. C1640-1660 The Civil War caused turmoil and upheaval that affected every strand of life in England. It challenged and upturned the deeply ingrained feudal system with a Monarch as the head of all moral, spiritual and governmental life, and moved thought and order towards new democratic ideas and systems of rule. This period saw a new experimentation in ideas and attitudes among the population, which was not welcomed by many. As Christopher Hill writes "What was new in the 17 centaury was the idea that the world might be permanently turned upside down". In the wake of Charles's regicide there was a "popular mid-seventeenth-centaury belief that the establishment of a prefect society was imminent" (Coward). Many radical movements, from the Levellers to the 5th monarchists flourished, posing a threat to traditional conformist ideas on political, social and religious margins, which defined the boundaries on which the traditional feudal system was based on. This created much controversy among a nation seeking stability, and so this period can be thought of radical in the sense of change. It is important to be aware just how deeply intergrained the church and Monarch was in every day life. ...read more.

The intellectual and political movement called the Levellers emerged in 1645-46 towards the latter end of the first English Civil War. Led by John Lilburne they believed that everyone was bourn "equal in majesty"; and thus in a "levelled" society. In their rejection of inequality, they believed in "The basic principal that sovereignty lay not with parliament but the people". This challenged civic and social order furthermore, with support both among the population and roughly 800 in the army, they posed a serious threat to Cromwell's power. Radical thinking within the army was a fear for Cromwell due to his strong reliance upon it. This culminated in what D. Underdown calls "the Levellers final defeat at Burford", where Cromwell swiftly quells a number of small army revolts, however Austin Woolrych claims "The Levellers were in fact a precociously well organised pressure group, rather than a revolutionary movement". Many historians doubt the degree of threat the Levellers posed. This is backed through Underdown's belief that," only in London and the home counties... was there any effective civilian movement". Moreover by 1649 Army back payments were settled, harvests had improved resulting in the movement dieing out. Therefore it seems that many radical ideas and movements never took hold, however the possibility was enough to try and remove them. ...read more.

Radical thinking was a threat to the authorities, even if it was not implemented. Groups such as the Diggers threatened the higher levels of the feudal system, as they wanted to abolish laws of ownership, questioning Landowners and established feudal power. The Ranters threatened the concept of sin, ripping apart the populations fabric on which traditional morality and life was woven from, furthermore the state method of communication. All the radical movements threatened both religion and state, arguably more through their ideas then actions. Therefore significance can be defined by the, impact and consequences of radical thought and attitude. Groups such as the Levellers and Diggers died out relatively quickly, not having either the time or power to truly establish themselves. Others returned to the privacy of closed doors after the return of the monarchy. David Underdown describes the impact of the Interregnum period as " a intellectual eruption (which) touched only a small minority-most continued to accept the reiterated message of higherical order to hanker not for religious liberty, but for the comfortable certainties of the old regime". Therefore what can be said is that this period of experimentation was not met with open arms nor did it become established, however ideas such as those of the Diggers resurfaced in both the Russian and French civil wars. Furthermore it was the precursor to early democracy and constitutional Monarchy, on which today's boundaries are based on. ...read more.