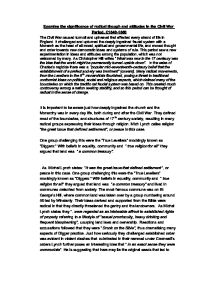 Examine the significance of radical though and attitudes in the Civil War Period. C1640-1660

Examine the significance of radical though and attitudes in the Civil War Period. C1640-1660 The Civil War caused turmoil and upheaval that affected every strand of life in England. It challenged and upturned the deeply ingrained feudal system with a Monarch as the head of all moral, spiritual and governmental life, and moved thought and order towards new democratic ideas and systems of rule. This period saw a new experimentation in ideas and attitudes among the population, which was not welcomed by many. As Christopher Hill writes "What was new in the 17 centaury was the idea that the world might be permanently turned upside down". In the wake of Charles's regicide there was a "popular mid-seventeenth-centaury belief that the establishment of a prefect society was imminent" (coward). Many radical movements, from the Levellers to the 5th monarchists flourished, posing a threat to traditional conformist ideas on political, social and religious aspects, which defined many of the boundaries on which the traditional feudal system was based on. This created much controversy among a nation seeking stability, and so this period can be thought of radical in the sense of change. It is important to be aware just how deeply ingrained the church and the Monarchy was in every day life, both during and after the Civil War. ...read more.

Some suggest they were fabricated to warn the population off the dangers of many of these ideas. If this were true, it indicates that radicalism posed a real enough threat to the current authorities. However, there is evidence of their existence in the 1650 Blasphemy Act. Either way, the authorities saw in them a real potential threat not merely to the feudal system, but also to Cromwell, the gentry and the landowners. One of the most interesting and radical groups to emerge out of this period were the Levellers. Led by John Lilburn they were one of the first urban socialist and working class movements. They believed that everybody was born "equal in majesty"; and thus in a "levelled" society. There is no doubt that their ideas more than actions frightened those in power, especially Cromwell. This is evident in his harsh suppression of revolts within the Army at Ware and Burford. They rejected all inequality, thus also governmental control and held the view in "The basic principal that sovereignty lay not with parliament but with the people". The amount of time John Lilburn spent incarcerated is evidence of the degree of threat he and his followers posed and also how radical these ideas were in their refusal to acknowledge the established and centralised power base. Yet Austin Woolrych claims "The Levellers were in fact a precociously well organised pressure group, rather than a revolutionary movement". ...read more.

Some of these came to inform later historical events, such as the Russian and French Revolutions. They were significant in that they did, be it in conflicting ways, challenge Cromwell's power and his ideals and posed a real threat to his New Model Army. They were also significant in that they opened the doors to many more possibilities and fresh interpretations on spiritual and civic life. There is little evidence that any of these groups survived after the return of the Monarchy, but many of them exist in some form today. One could conclude that the most radical thought of the time was Cromwell's "reformation of manners", which attacked feudal, Crown and Church led structures of government, law and religious worship. With this he also unleashed an avalanche of further and even more extreme, therefore radical, ideas, many of which soon began to compromise and endanger his vision and the four fundamentals. The attitudes, expectations and change in thinking by Baptists, Presbyterians, Ranters, Quakers etc., help plant the seeds for democratic thought and constitutional Monarchy. This period of the Civil War was particularly significant because it was a time when a great range of experimental interpretations brought the people to question their relationship to God and law, to question the rulers and the ruled. Although a turbulent and an uncertain time, it certainly was a creative and innovative change in thinking. ...read more.