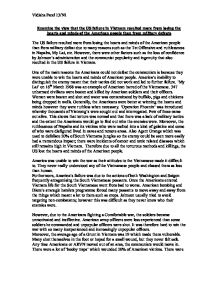 Therefore it was hard to win the war when Grunts were demoralised and terrified which links to losing the hearts and minds of the American people. Furthermore, over 8 million volunteered to serve in the army as they were inspired by a sense of duty, patriotism, family tradition or a sense that communism should be stopped. Many wanted to learn new skills such as fighting or enjoyed the war (found it fun to fight, the drama and heroics). Others enjoyed killing other men, but this always attracted the army. However, there was a lack of realism as there were bad soldiers who were not properly trained for the war. This helps to explain why these men were unable to defeat the communists. The Navy did not like taking orders from Westmoreland's ground army and they did not get along. The soldiers did not believe in what they were doing and disagreed with tactics. There were a higher proportion of black soldiers who were combat troops rather than doing desk jobs which shows the racial discrimination of the US. Therefore this links to losing the hearts and minds of the Americans and many back individuals would not support the US for doing such things. Furthermore, there were discipline problems; $10,000 reward for the death of the officer responsible for Hamburger Hill. ...read more.

Both sides thought they won. However the US could not cope with 300 of their men dying therefore they lost morale, even though the VC lost more men. This links to the morale at home as people were dying which links to losing the hearts and minds of American people. As there were underground communist organisations, the communists knew when they would attack therefore they were one step ahead of the US and they could deal with it in advance. In addition, Saigon became an unsavoury city in the US war years. This made the country weaker and weakened the army and there was a negative impact of US on Saigon. Due to drugs and prostitution, the Vietnamese could not concentrate on the war as much as they were concentrating on what Americans were doing. Overall, US failure in Vietnam resulted more from losing the hearts and minds of the American people than from military defeats because what it came down to in the end was the support the US lacked as their tactics were not working and they were killing innocent victims as they never knew who their enemy was. US failure in Vietnam was also due to communist popularity and ingenuity and the fact that they knew what they were fighting for and had the knowledge of Vietnam that the US lacked. Therefore, although the failure in Vietnam was due to military defeat, it was more from losing the hearts and minds as people were unmotivated. ?? ?? ?? ?? Vidisha Patel 13/N1 ...read more.