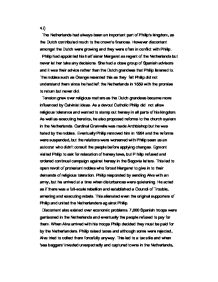 Explain the causes of the Dutch revolt.To what extent was Spain to blame for the outbreak of war with England in 1585?

4.i) The Netherlands had always been an important part of Philip's kingdom, as the Dutch contributed much to the crown's finances. However discontent amongst the Dutch were growing and they were often in conflict with Philip. Philip had appointed his half sister Margaret as regent of the Netherlands but never let her take any decisions. She had a close group of Spanish advisors and it was their advice rather than the Dutch grandees that Philip listened to. The nobles such as Orange resented this as they felt Philip did not understand them since he had left the Netherlands in 1559 with the promise to return but never did. Tension grew over religious matters as the Dutch grandees became more influenced by Calvinist ideas. As a devout Catholic Philip did not allow religious tolerance and wanted to stamp out heresy in all parts of his kingdom. As well as executing heretics, he also proposed reforms to the church system in the Netherlands. Cardinal Granvelle was made Archbishop but he was hated by the nobles. ...read more.

ii) Philip had and alliance with England faded with his marriage to Mary, but when she died the Protestant Elizabeth came to the throne. She was always a problem to Philip and he finally went to war with England in 1585. Both monarchs had acted in provocative ways, so one country could not be blamed entirely. When Mary died in 1558 Philip proposed to Elizabeth, hoping she would be looking to Spain for protection and support. Elizabeth turned him down and the family ties between the two nations were gone. However relations remained stable as both felt threatened by the French and Philip even prevented the Pope from excommunicating Elizabeth. Later tensions began to increase with the Dutch Revolt. Alva's army entered the Netherlands to suppress the mostly Calvinist rebels and Elizabeth feared Spain would launch a Catholic invasion of England via the Netherlands. This fear along with the decreasing French threat and thus less need of the Habsburg alliance led to Elizabeth allowing attacks on Spanish shipping, which Philip responded to by doing the same. ...read more.

Philip's actions in England also caused Elizabeth great concern. He backed the Ridolfi Plot in 1571, which planned to replace Elizabeth with the Catholic Mary Queen of Scots. This plot failed and Elizabeth became even more wary. Philip sent troops to Ireland to support the Irish in rebellion against the English, and this also failed disastrously. Most importantly was the Throckmorton Plot in 1583 when the conspirators planned to assassinate Elizabeth to place Mary on the throne. This time Philip's involvement was clear as his part was admitted by the Spanish Ambassador, worsening the already strained relationship between the countries. The build up of tension finally led to Philip's decision to launch the Armada after Drake attack more Spanish ships within Philip's territory. Therefore both countries had responsibility in the outbreak of war. There were also outside factors such as the decline of French threat which made the alliance less valuable and war more likely. Both countries acted in provocative ways, however England did not directly interfere within Spain, whereas Philip tried on more than one occasion to support attempts to replace Elizabeth. Hence it can be said Spain was to be blamed to a significant extent for the outbreak of war. ...read more.