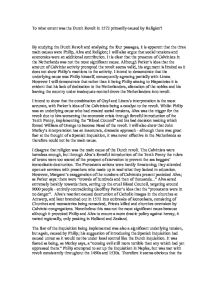 To what extent was the Dutch Revolt in 1572 primarily caused by Religion?

To what extent was the Dutch Revolt in 1572 primarily caused by Religion? By studying the Dutch Revolt and analysing the four passages, it is apparent that the three main causes were Philip, Alva and Religion; I will also argue that social tensions and economics were an additional contribution. It is clear that the presence of Calvinists in the Netherlands was not the most significant cause. Although Parker's idea that the amount of Calvinist activity prompted the revolt seems valid, his argument is limited as it does not show Philip's reactions to the activity. I intend to demonstrate that the underlying cause was Philip himself, consequently agreeing partially with Limm. However I will demonstrate that rather than it being Philip aiming to Hispanicise it is evident that his lack of dedication to the Netherlanders, alienation of the nobles and his leaving the country under inadequate control drove the Netherlanders into revolt. I intend to show that the combination of Geyl and Limm's interpretation is the most accurate, with Parker's idea of the Calvinists being a catalyst to the revolt. Whilst Philip was an underlying cause who had created social tensions, Alva was the trigger for the revolt due to him worsening ...read more.

He effectively neglected the government by settling for Margaret, who had little administrative or diplomatic experience, which demonstrates his lack of interest in the running of the Netherlands. Philip was constantly distracted by wars with France and the Turks, and made it clear that the cost of keeping such a large army had to fall on the Netherlanders. Philip, as Peter Limm says, continually tried to centralize; "...believed that Spain, and especially Castile, was the centre of the Habsburg monarchy." The Dutch nobility were distressed by Philip's actions - his appointment of Granvelle to inner Spanish consultata and the new bishoprics scheme - 14 new bishoprics, each with two inquisitors as assistants caused cries of protests. Philip had no intention of letting the Dutch nobility control policy making - their desire to restore the traditional style of administration threatened his centralisation plans. Although I agree with Peter Limm that Philip was the main cause of the revolt, he is mistaken in thinking Philip's aim was to Hispanicise. "Philip was less inclined than his father to compromise with traditional ruling" - however, Philip's provinces were also worried about their traditional preferences being destroyed, thus contradicting strongly with Limm's main argument. ...read more.

When assessing the historians, it seems that the most accurate interpretations are B, C and D. Pieter Geyl has correctly assessed the impact of Alva; he describes Alva's Blood Council and touches on Alva's savage ambition in intimidation. Nevertheless, Geyl only focuses on Alva's persecution, but neglects his poor reaction to the rebels. Peter Limm touches on Philip being the main cause of the revolt, but although I agree Philip was the primary reason, it is clear that the idea of him pursuing a policy of Hispanicisation is not entirely accurate and may have been a misinterpretation of Philip's absence. Although it was not main cause, I agree with Geoffrey Parker's idea that the amount of Calvinist activity may have triggered the cause of the revolt; however his argument is limited as it does not show Philip's reactions to the activity. Parker links Geyl's and Limm's interpretations to produce the most accurate analysis. The combination seems to form a strong basis on why the Revolt of 1572 occurred, but I strongly disagree with John Motley's interpretation of the impact of the Spanish Inquisition, as although Philip did target heresy strongly, there were few Inquisitors in the Netherlands and the fear of the Inquisition was greater than the presence itself. ...read more.