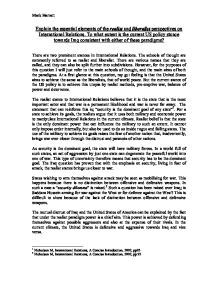 Explain the essential elements of the realist and liberalist perspectives on International Relations. To what extent is the current US policy stance towards Iraq consistent with either of these paradigms?

Explain the essential elements of the realist and liberalist perspectives on International Relations. To what extent is the current US policy stance towards Iraq consistent with either of these paradigms? There are two prominent stances in International Relations. The schools of thought are commonly referred to as realist and liberalist. There are various names that they are called, and they can also be split further into subdivisions. However, for the purposes of this question I will just refer to the main schools of thought, and the main aims of both the paradigms. At a first glance at this question, my gut feeling is that the United States aims to achieve the same as the liberalists, that of world peace. But the current stance of the US policy is to achieve this utopia by realist methods, pre-emptive war, balance of power and deterrence. The realist stance to International Relations believes that it is the state that is the most important actor and that war is a permanent likelihood and war is never far away. The statement that can reinforce this is; "security is the dominant goal of any state"1. ...read more.

The policy being followed is one of realism, having an effect of "containment and deterrence"4 to Iraq. The best example of the deterrence that the United States has placed on Iraq was the Gulf War. The threat of nuclear weapons by America and Israel deterred Saddam Hussein from using his.5 Opposite to this stance is that of the liberalist or pluralists, which arose after World War I and the advent of the League of Nations. Prominent supporters of this were Woodrow Wilson, Lloyd-George and other international statesmen. They believe that there is a possibility of a world that is war-free. Liberalists believe that their main aim is economic success and that priority must be give to the liberal values. It generally uses international organisations to achieve its aims. With the end of the Cold War the liberalists thought that the new cooperativeness would lead to a peaceful world. However, its main limitation is that it ignores the role of power balance. It does accept the role of the state as important, but it also says that other actors such as multi-national corporations have a larger role to play. ...read more.