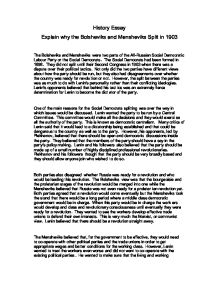 Explain why the Bolsheviks and Mensheviks Split in 1903

History Essay Explain why the Bolsheviks and Mensheviks Split in 1903 The Bolsheviks and Mensheviks were two parts of the All-Russian Social Democratic Labour Party or the Social Democrats. The Social Democrats had been formed in 1898. They did not split until their Second Congress in 1903 when there was a dispute over their political tactics. Not only did the two parties have different views about how the party should be run, but they also had disagreements over whether the country was ready for revolution or not. However, the split between the parties was as much to do with Lenin's personality rather than their conflicting ideologies. Lenin's opponents believed that behind his tactics was an extremely fierce determination for Lenin to become the dictator of the party. ...read more.

Plekhanov and his followers though that the party should be very broadly based and they should allow anyone join who wished to do so. Both parties also disagreed whether Russia was ready for a revolution and who would be leading this revolution. The Bolsheviks view was that the bourgeoisie and the proletarian stages of the revolution would be merged into one while the Mensheviks believed that Russia was not even ready for a proletarian revolution yet. Both parties agreed that a revolution would come eventually but the Mensheviks took the stand that there would be a long period where a middle class democratic government would be in charge. When this party would be in charge the workers would develop and class and revolutionary consciousness until eventually they were ready for a revolution. ...read more.

However, the Bolsheviks seemed to attract the younger and more militant workers who liked to have some form of discipline, have firm leadership and quite simple slogans. The Mensheviks attracted a range of different type of works and members of the intelligentsia. They also attracted a lot more non-Russians especially Jews and Georgians. In the Second Congress, Plekhanov was defeated by Lenin. Lenin and his followers had forced the party to decide whether to follow Plekhanov's idea of a broad-based party which was open to all revolutionaries or his own idea of a small, tightly knit and very exclusive party. Plekhanov's followers were named the Mensheviks, or the minority party and Lenin's followers were names the Bolsheviks. However, at the time when tsarist government fell in 1917, the Mensheviks were always the side with the most members while the Bolsheviks were the side with the fewer members. ?? ?? ?? ?? ...read more.