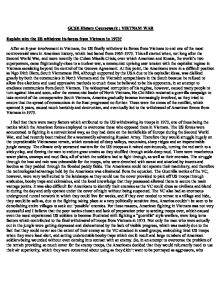 Explain why the US withdrew its forces from Vietnam in 1973?

GCSE History Coursework : VIETNAM WAR Explain why the US withdrew its forces from Vietnam in 1973? After an 8-year involvement in Vietnam, the US finally withdrew its forces from Vietnam to end one of the most controversial wars in American history, which had lasted from 1965-1973. This all started when, not long after the Second World War, and more recently the Cuban Missile Crisis, over which American and Russia, the world's two superpowers, came frighteningly close to a nuclear war, a communist uprising saw tension with the capitalist regime in Vietnam escalating beyond the control of the Geneva Agreement. At this point, the Americans were in a difficult position as Ngo Dinh Diem, South Vietnamese PM, although supported by the USA due to his capitalist ideas, was disliked greatly by both the communists in North Vietnam and the Vietminh sympathisers in the South because he refused to allow free elections and used oppressive methods to crush those he believed to be his opponents, in an attempt to eradicate communism from South Vietnam. The widespread corruption of his regime, however, caused many people to turn against him and soon, after the communist leader of North Vietnam, Ho Chi Minh restarted a guerrilla campaign to take control of the uncooperative South Vietnam, America gradually became increasingly involved, as they tried to ensure that the spread of communism in the East progressed no further. These were the stems of the conflict, which spanned 8 years, caused much hardship and destruction, and eventually led to the withdrawal of American forces from Vietnam in 1973. I feel that there were many factors which attributed to the US withdrawing its troops in 1973, one of these being the tactics which the American forces employed to overcome those who opposed them in Vietnam. The US forces were accustomed to fighting in a conventional way, as they had done on the battlefields of Europe during the Second World War, and had recently been trained for a westwardly advancing Russian Army. ...read more.

By killing many South Vietnamese people and destroying their habitat, the Americans were not achieving this objective. They did not intentionally kill South Vietnamese, however, but often resorted to burning villages due to the frustration of not being able to recognise VC among the ordinary civilians. The people of South Vietnam needed to be shown how corrupt the communist regime was, if the Americans were to keep a capitalist regime alive in Vietnam, but all they saw was a capitalist regime invading their country, interfering with their internal affairs and killing their people, while the VC blended into the towns, spoke the language and helped with the general upkeep of the farms, therefore making it relatively easy for the South Vietnamese people to decide who to side with. To the South Vietnamese peasants, Americans were seen as rich and ruthless men, who bought their women and destroyed their land, and were therefore deeply resented. The Americans were further despised once the plan for 'Strategic Hamlets' was put into operation as, although they contained modern facilities and were fortified against VC infiltration, peasants resented being uprooted from their ancestral homelands. To make matters worse for the US forces, the SVA regime was very unpopular and Diem, who favoured Catholics over the native Buddhists, was hated so much that he was eventually assassinated. The Americans were therefore seen to be supporting the SV politicians who were biased and very much disliked by the common people, which was a view reflected by these ordinary farmers' opinions of the US troops. Not only this, but also the fact that, in a predominantly peasant society, 'Marxist' ideas of the redistribution of wealth had great appeal, which led many to turn their support to the more friendly and familiar, communist VC. The US had many other problems to contend with too as their strategies, equipment, attitudes and limitations were not suited to this kind of warfare. ...read more.

as Che Gevara, but hippie culture demoted the ideals of war, which was always going to make it a near impossible task to satisfy the American public, a crucial objective for a democratic leader. The many protests which were participated in played its role in the withdrawal of troops due to the amount of pressure which the government were being put under. They needed to keep the population content and scandals such as Operation Phoenix and the Pentagon Papers severely discredited the president, Nixon, and only worsened matters for the government. I do however feel that these are all linked to media coverage of the war, as without the awareness of what horrific things were happening in Vietnam, the people wouldn't have had as much strength behind their cases against the war. Even though media was one of the main reasons for the actual war in Vietnam ending due to the fact that, as a democracy, the US needed the support of its people and was therefore limited, I feel that America would never have won the war anyway as the men fighting lacked the motivation of the VC. However, without the media involvement in the war, the people back home may have shown more support for the effort in Vietnam and the government wouldn't have been forced to worry about public opinion as much as it would be hard for people to form factually-based views on what was going on. On the other hand, due to the changing international scene, there may have still been a great opposition to the war even if images weren't shown to the public back home as people felt strongly against violence and would still have rebelled against the government. The media definitely increased support for a peace agreement, by educating the public about the terrors of war and, without it, the removal of troops would have most likely have taken place later than 1973, making it the main cause of the final withdrawal of troops, in 1973. ...read more.