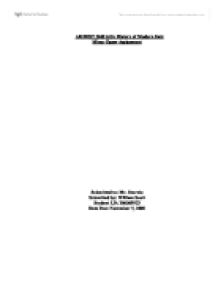 AK/HIST 3660 6.0A History of Modern Italy Minor Essay Assignment Submitted to: Mr. Sturnio Submitted by: William Scott Student I.D: 206569933 Date Due: November 7, 2005 In the book "Fascist Italy", author John Whittam gives an in-depth analysis of the biggest mass movement in Italian history, and the world for that matter. Fascism was a major political movement that has left resounding effects on the history of Italy. Benito Mussolini was one of Italy's greatest leaders, and was the leader of the first national movement called Fascism. The Fascist movement was quite complex and many components were involved. Fascism was able to capitalize on Italians who saw themselves as nationalists with a strong sense of Italian pride. "Fascist Italy" is a dynamic and concise foreword to the experience of Italian Fascism and its importance. Rather than discussing various interpretations of fascism, the book "Fascist Italy" concentrates on providing a balanced account of Fascist Italy by analyzing various threads within the fascist movement, explaining the reasons for the successful March on Rome, the characteristics of Fascist Italy and finally traces the events leading up to the rise of Benito Mussolini's Fascist regime. With the use of primary documents and the most recent research, this book gives the reader a logical breakdown of the beginnings of the fascist movement, the reasons behind its political triumph and the techniques used to build and join together a government competent enough to deal with trials and tribulations of a mass society. ...read more.

Mussolini was born in Romania in 1883. His father named him after a Mexican revolutionist. He was a school teacher but very quickly became a socialist writer. "In 1912 he became editor of Italian Socialist Party (PSI) 1912-1914. (AVANTE newspaper)" 2 He was a left wing socialist who did not support the war. However Benito changed his views and became an interventionist and believed Italy should join the war. Ideology was not important to Mussolini, but power was. A force of nationalism was embraced by the country of Italy. Mussolini was conscripted to war during 1915-1917. Radicalized by war experiences, he started writing about liberals and peace makers. Although he did not give up, Mussolini realized he had to do something to agitate and organize men to groups that would attack socialists. "Those who decided to join Mussolini's movement during the months following 23 March 1919 became the proud bearers of the title 'fascists of the first hour' " 3 Benito also formed a military organization called the 'Black shirts'. Mussolini said "he'd prefer to use guns and bombs than ballot boxes against opposition"4. Using nationalism as their ideological weapon and military formations to impose their views, they embarked on a determined and forceful course of public agreement. Benito used violence to win over the people; "Clubs and castor oil played a significant part in the initial phases and helped Mussolini to secure the premiership in 1922"5. ...read more.

"The March on Rome was planned not because parliamentary paralysis had become intolerable, but because parliamentary paralysis might come to an end in a union of democratic groups"9. On January 3rd 1923, Italy becomes full fascist state. Mussolini used the Fascist overthrow with force, yet all it took was threat of force. It was Mussolini who had triumphed as head of government and 'Duce of Fascism', was the supreme coordinator, the ultimate mediator and the dictator of Fascist Italy. In conclusion, the book review on "Fascist Italy" was an exceptional interpretation of what transpired during the period of Fascism. It gives the reader an understanding of how and why fascism came to be, and why it lasted as long as it did. "Fascist Italy" by John Whittam, can be considered an excellent addition to the book collection, because the movement was the first of its kind and one of the most important movements in history. Whittam vividly explains how one man conquered a whole nation. His writing style is clear, useful and straight to the point. Whittam's thought provoking style enlightens the reader and is considered a great resource in the context of other works in the field. Personally the book "Fascist Italy" has opened my eyes to the hardships that took place a century ago. In addition, it is amazing how one man can bring together and unite a whole country and nation as one. Lastly, "Fascist Italy" has made me want to examine the mass movement of 'Fascism' more exhaustively for further research. ...read more.