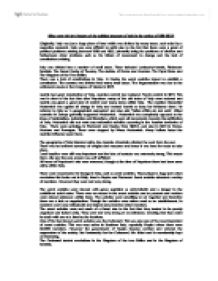 What were the key features of the political structure of Italy in the period of 1818-1833? Originally, Italy was just a large piece of land which was divided by many states, each ruled by a respective monarch. Italy was very difficult to unify due to the fact that there were a great of political problems existing between 1818 and 1833, primarily being the problems of division and furthermore other problems such as the failure of movement to change and the lack of constitutions existing. Italy was divided into a number of small states. These included Lombardy-Venetia, Piedmont-Sardinia, The Grand Duchy of Tuscany, The duchies of Parma and Modena, The Papal States and The Kingdom of the Two Sicilies. ...read more.

Metternich did not want any nationalist activities occurring in the Austrian territories of Italy. There were uprisings in Piedmont and Naples from 1820-1, and also in 1831 in Parma, Modena and Romagna. These were stopped by Prince Metternich. Many Italians hated the Austrian influence upon them. The geography of Italy hindered unity, the Apennie Mountains divided the west form the east. There was no uniform currency of weights and measures and hence it was hard for trade to take place. Local loyalties were still very important and the idea of cantado was extremely strong. This meant that a city and the area around was self sufficient. All traces of Napoleon's rule were removed, though at the time of Napoleon there had been some unity within Italy. ...read more.

One of the best known secret societies was the Carbonari. This was also one of the most important of secret societies. This was very active in Southern Italy, especially Naples where there were 60,000 members. However the government of Naples became worried and ordered the suppression of the society. But fortunately for the Carbonari, this failed and its membership kept on increasing. The Carbonari started revolutions in the Kingdom of the two Sicilies and in the Kingdom of Sardinia. A member of the Carbonari, called Giuseppe Mazzini formed an establishment known as Young Italy in 1831. This was to spread the ideas of republicanism and nationalism to the people of Italy. This organisation was dedicated to the aim of the unification of Italy. There were various political groups in Italy during this time period. There were liberals, radicals and nationalists. ...read more.