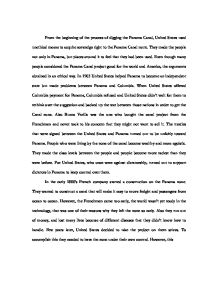 From the beginning of the process of digging the Panama Canal, United States used unethical means to acquire sovereign right to the Panama Canal route. They made the people not only in Panama, but places around it to feel that they had been used. Even though many people considered the Panama Canal project good for the world and America, the arguments obtained in an ethical way. In 1903 United States helped Panama to become an independent state but made problems between Panama and Columbia. When United States offered Columbia payment for Panama, Columbia refused and United States didn't wait for them to rethink over the suggestion and backed up the war between those nations in order to get the Canal zone. ...read more.

They wanted to construct a canal that will make it easy to move freight and passengers from ocean to ocean. However, the Frenchmen came too early, the world wasn't yet ready in the technology, that was one of their reasons why they left the zone so early. Also they run out of money, and lost many lives because of different diseases that they didn't know how to handle. Few years later, United States decided to take the project on them selves. To accomplish this they needed to have the zone under their own control. However, this 2 Isthmus was already under control of the Columbian State. ...read more.

They made Panama see Columbia as their enemy. In that way they backed up Panama with no considerations toward the neighbor nation, and got what they wanted the Canal Zone. The actions that United States took during early 1990's were characterized by imperialism and expansionism. All they wanted was to expand their territory and to take over more territories. Columbia tried to revolt and stand up for the country that United States had taken over -Panama. As a nation that wants to keep its own borders Columbia gained some powers and was ready to stand up for the Isthmus, they were ready to fight. However, United Stated was know at the same time as a Country that could fight back and prove all the other nations that she might over take every part of every Isthmus ...read more.