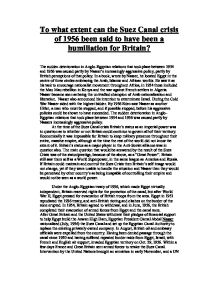 To what extent can the Suez Canal crisis of 1956 been said to have been a humiliation for Britain?

Intervention by the United Nations brought an armistice in early November, and a UN emergency force replaced the British and French troops. The canal, blocked for more than six months because of damage and sunken ships, was cleared with UN help and reopened in April, 1957. Egypt agreed to pay, in six annual instalments, approximately $81 million to shareholders of the nationalised Suez Canal Company; final payment was made on Jan. 1, 1963. The decision to use force against Nasser was clearly related to the assessment made of him but it was possible to take a very unfavourable view of Nasser, and yet to insist that any action taken must have the approval of the UN. This was the position adopted by Gaitskell. Many of the leaders in the British and French Governments saw Nasser as another Hitler and Gaitskell agreed although he said "While force can not be excluded, we must be sure that the circumstances justify it and that it is, if used, consistent with our belief in, and our pledges to the Charter of the United Nations and not in conflict with them". A vote for a Cease Fire was initiated, Britain vetoed it and Gaitskell condemned the act as "an act of disastrous folly whose tragic consequences we shall regret for years". ...read more.

The United States had refused to back Britain in supporting it in Egypt. The U.S had told Britain to get out, as they had no intention of helping them. The Canal had been put out of action to spite the West by Egyptian forces sinking ships to block a passage for Western shipping industries. This was the major indication that Britain was no longer a World Power and was nothing more than a minor in comparison to the United States. The Suez Crisis was very humiliating for Britain at the time. Britain had left Egypt like a dog with its tail between its legs on America's command. This is a major point in Britain's self image, status and prestige. The entire Suez Crisis would have changed the world's view on the new Britain. It was no longer a mighty imperial power, it was but a minor influential power in the Anti-Soviet alliance and its status and prestige as a "Great Power". Britain's national pride and international standing was greatly dented - Britain were no longer seen as a Great Power at all. Members of Britain's commonwealth were unsettled and whether or not the Commonwealth would break up was uncertain. Many saw Britain as nothing but a follower of America. Good relations were restored with America almost immediately. The Suez Canal was re-opened under Egyptian control, helped out by the UN. ...read more.