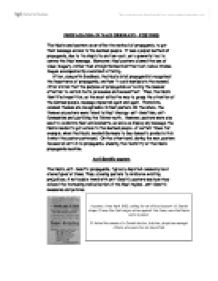 PROPAGANDA IN NAZI GERMANY- POSTERS The Nazis used posters as an effective method of propaganda, to get their message across to the German people. It was a poplar method of propaganda, due to its simplicity and low-cost, yet a powerful tool to convey the Nazi message. Moreover, Nazi posters allowed the use of visual imagery, rather than straightforward written text, hence intense images accompanied by oversized lettering. Hitler, along with Goebbels, the Nazis chief propagandist recognised the importance of propaganda, and how it could manipulate the masses'. Hitler stated that the purpose of propaganda as "calling the masses' attention to certain facts, processes and necessities". Thus, the Nazis identified repetition, as the most effective way to grasp the attention of the German people, message repeated again and again. Therefore, common themes are recognisable in Nazi posters. On the whole, the themes on posters were linked to Nazi ideology: anti-Semitism, anti- Communism and, glorifying the Fuhrer myth and glorifying the S.A and later the SS. ...read more.

Overall, Anti-Semitic propaganda reinforced the feelings and prejudices, which some Germans held, yet was not so effective in winning any converts, due to the immoral ideas the Nazis were propounding. Nonetheless, such propaganda did provide use to the Nazis. It allowed for an atmosphere accepting violence, as anti-Semitic measures' accelerated. Moreover, it encouraged inaction and tolerance of such measures and violence, whilst portraying the Nazis as saving the day. Anti-Communist Posters Anti- Communism was linked closely to anti-Semitism, and both were pivotal in the Nazis Weltanschauung. It also, likes anti- Semitic propaganda formed an environment in which violence was tolerated. Before, Hitler took power, such propaganda was used to gain support, fight against the communists in elections. However, once the Nazis were in power, and political opponents removed, anti-communist propaganda was targeted towards Russia, and came more prevalent during WW2. The aim of anti-communist propaganda was to arouse and exaggerate the threat of communism, thus present the Nazis as saviours. ...read more.

Allowing people to relate to him. As well, portraying Hitler as connecting with the people, many posters featured Hitler alone, with the purpose of reaching out to Germany as a whole. Often being used to: glorify Hitler and the Reich. Even during the war such posters continued, and did not change much over time, and events. They still served to glorify Hitler, and only changed their message; the powerful image remained. On the whole, such propaganda was quite effective in creating the Fuhrer cult, and gave Hitler much support from different areas of society. The way in which Hitler was portrayed in these posters, won him supreme popularity and fame. The constant glorification of Fuhrer and Reich supported the war effort and assisted in breeding pride in Germany, amongst many Germans. In addition, such propaganda allowed, people who may not have originally followed the Nazis, to connect with Hitler. WW2 Posters. Wartime propaganda in Germany had many different themes: it emphasised production, rationing, however, also to convince the public to fight, and to warn of spies. Posters were essential to portray such themes; even more central as a toll of persuasion. ...read more.