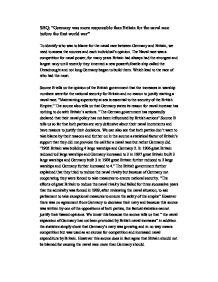 Germany was more responsible than Britain for the naval race before the First World War. Discuss.

SBQ: "Germany was more responsible than Britain for the naval race before the first world war" To identify who was to blame for the naval race between Germany and Britain, we need to assess the sources and each individual's opinion. The Naval race was a competition for naval power, for many years Britain had always had the strongest and largest navy until recently they invented a new powerful battle ship called the Dreadnought and not long Germany began to build them. Which lead to the race of who had the most. Source B tells us the opinion of the British government that the increases in warship numbers were for the national security for Britain and no reason to justify starting a naval race. "Maintaining superiority at sea is essential to the security of the British Empire." The source also tells us that Germany states its reason for naval increase has nothing to do with Britain's actions. "The German government has repeatedly declared that their naval policy has not been influenced by British actions" Source B tells us so far that both parties are very defensive about their naval increments and have reasons to justify their decisions. We can also see that both parties don't want to take blame by their reasons and further on in the source a statistical factor of Britain's support that they did not provoke the call for a naval race but rather Germany did. ...read more.

However because this was written after the war the opinions of the Admiral of the German navy may not have been the same as it was. The intentions for constructing a rapid growth of the German navy could have been intended for war however in Source B the British government states that "The naval expansion of Germany has not been provoked by British naval increases". This was written in 1912 which supports source C statement of "we never wished to replace British world power". We can conclude from this that Germany certainly felt that it shouldn't been blamed on the naval race as they have not demonstrated aggression but only growth in numbers with only defensive intentions and instead Britain's intimidation of Germany's naval fleet caused more tension therefore disagreeing that they should be more to blamed. Source D was written by Kaiser William II, the source tells us that from conversations with Bismarck. The source tells us that William intended for the Germany's navy as a defense for the country's important assets in foreign colonies. Telling us also that the colonies relied on naval protection, which required a fleet constructed in time. "Bismarck intended to use the colonies only for trade or as objects to exchange land in treaties and not to make any other use for them in Germany. ...read more.

Tells us that after the war the truth about British intentions of, in source A "Anybody who knows Britain a little knows that Britain has no intention to threaten Germany with the British fleet or attack Germany at all." Was false and that they were wanting war like the Kaiser stated "I am not impressed by their shouts of war". We can conclude that in this source Germany felt like Britain was to blame as they were being unfair in regards to the unfair demands of ship numbers even though there were no plans or intentions stated or shown from Germany asking for war. To conclude we can see that overall that all sources agree that both parties had reason to be blamed from sources A,D,C as they all pointed out that Germany's navy was for the intentions of protections of their own colonies and businesses. Even Source B stated this as well and that these sources were written before, during and after the naval race and world war, to prove that their intentions were real. Source B's Statistical evidence didn't prove that Germany was a threat and was merely used as an excuse to build more ships. From all this we can see that to a certain extent of wanting peaceful competition was Germany responsible but mostly it was Britain's fault to a large extent for causing aggravation from unfair demands and restrictions. ?? ?? ?? ?? ...read more.