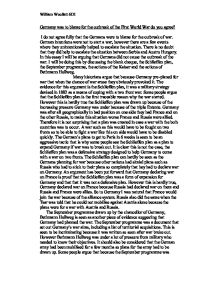 Germany was to blame for the outbreak of the First World War do you agree?

Germany was to blame for the outbreak of the First World War do you agree? I do not agree fully that the Germans were to blame for the outbreak of war. German intentions were not to start a war, however there are a few events where they unintentionally helped to escalate the situation. There is no doubt that they did help to escalate the situation between Serbia and Austro Hungary. In this essay I will be arguing that Germans did not cause the outbreak of the war. I will be doing this by discussing the blank cheque, the Schlieffen plan, the September programme, the actions of the Kaiser and the actions of Bethmann Hollweg. Many historians argue that because Germany pre-planed for war that when the chance of war arose they obviously provoked it. The evidence for this argument is the Schlieffen plan, it was a military strategy devised in 1882 as a means of coping with a two front war. Some people argue that the Schlieffen plan is the first traceable reason why the war started. However this is hardly true the Schlieffen plan was drawn up because of the increasing pressure Germany was under because of the triple Entente. ...read more.

The September programme was a document that set out Germany's war aims, including a list of territorial acquisitions. This is seen to be incriminating because it was written so soon after war broke out. However Bethmann Hollweg was under a lot of pressure from military who needed to know their objectives. It should also be considered that the German army had been mobilised for a few months so plans for the army had to be drawn up. Some people argue that because the September programme was released so quickly that these objectives must have been premeditated. This is not completely true, it was important for the germens to think quickly what they were going to have to achieve in the war after all they were fighting on two fronts. Some of the objective might have been premeditated but these were probably defensive ones thought up long ago. It is clear to see that Bethmann Hollweg was caught between the Kaiser and Moltke. Bethmann Hollweg's behaviour is often criticized during the July crisis. It is Bethmann Hollweg's actions that are used as the argument against him. However what he did can be seen as a gamble that went horribly wrong. ...read more.

The real nation that was to blame for the outbreak of war was Austro-Hungary who even after finding no evidence that linked the assassins to any terror groups in Serbia and after Serbia agreed to their ultimatum still invaded their country. This is really the behaviour of a nation with war on their agenda. Austro-Hungary it can be said had to avenge the death of Franz Ferdinand. Russia too could have avoided war but much like the Kaiser the Tsar kept on changing his mind. In conclusion from the evidence above it can be seen that everyone muddled into war and that no one power is to blame. The September programme and the Schlieffen plan which are seen to highlight German guilt, do not and are actually defensive precautions not premeditated plans for war. Bethmann Hollweg and the Kaiser both were trying to achieve the same objective but were both communicating very well. The nations involved in the July crisis can be blamed for standing by their alliances instead of sorting out the situation. Germany did contribute to the mix up between nations in the Balkans and for inciting Austro-Hungary however they are not ultimately to blame for the outbreak of war. William Woollett 6D1 ...read more.