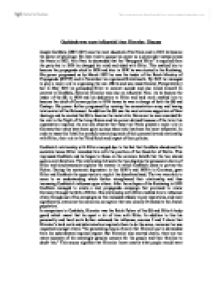 Goebbels was more influential than Himmler. Discuss Joseph Goebbels (1897-1945) was the most educated of the Nazis and in 1921 he became the doctor of philology. He even tried to pursue his career as a playwright instead joined the Nazis in 1922. As a Nazi he demanded that the "Bourgeois Hitler" is expelled from the party but in 1926 he changed his mind and sided with Hitler. This enabled him to become the propaganda chief in 1928 and later in 1930 he was elected in the Reichstag. His power progressed as by March 1923 he was the leader of the Reich Ministry of Propaganda (RNVP) and in November he organised Kristallnacht. By 1943 he managed to play a major role in organising the war efforts and was made General Plenipotentiary but in May 1945 he persuaded Hitler to commit suicide and also killed himself. In contrast to Goebbels, Heinrich Himmler was also an influential Nazi. As he became the leader of the SS in 1929 and his dedication to Hitler and hard work enabled him to become the chief of German police in 1936 hence he was in charge of both the SS and Gestapo. His power further progressed by running the concentration camp and having total control of the Holocaust. ...read more.

This emphasises that Himmler's manipulative and cunning skills enabled him to directly gain access to Hitler although "his subordination to Frick was more of less purely nominal." This exemplifies that even though in theory he was under Frick, he never followed this aspect of the theory. Unlike Goebbels, Himmler was always true to Hitler and would have never betrayed him. Until it became clear that Hitler was making mistakes. However Goebbels didn't even want Hitler in the Nazi party during the early stages and staggered taking over leadership when the Reich begun to collapse. In contrast to the relationship with Hitler of both Nazis, the use of propaganda played a significant role in the Third Reich to ensure that Goebbels is more influential. This was due to the fact that Goebbels ensured that his propaganda appealed to all groups of people and, as a result, it attracted people from a wider range of social and economic backgrounds than any other party. This was because the propagandist "must always be in a position to speak to people in language that they understand. These capacities are the essential preconditions of success." This emphasises that Goebbels knew how to use propaganda in a way that it is relevant to individual sections of the population in order to gain mass support. ...read more.

However in comparison to this, the impact of Himmler's policies also played an imperative role in the enhancement of his influence. This is predominately due to the fact that the SS where totally dedicated to what they regarded as the supreme virtues of Nazi ideology, loyalty and honour. The impact of the policies enabled Himmler to ensure that the SS where economically independent by forming companies to exploit the labour in the concentration camps. In addition to this the attitudes of the SS influenced the character of Himmler, who in 1933 over took the ideology and propaganda. Overall both these Nazis have displayed their determination and hard work in order to obtain the highest level of influence amongst the German people. They have been able to develop relationships with Hitler in order to play a crucial role in the Third Reich and have displayed the impact of their policies. However although both have been successful in achieving this, I personally disagree with the statement that "Goebbels was more influential than Himmler" because throughout my examination I have discovered that Himmler had the power to gain the greatest influence as he was head of the SS which must have been a hard role to play but instead he managed to use terror in order to influence the German people. Moreover he was able to overtake Goebbels's propaganda in 1933 whereas Goebbels was not able to overhaul Himmler and the SS. ?? ?? ?? ?? ...read more.