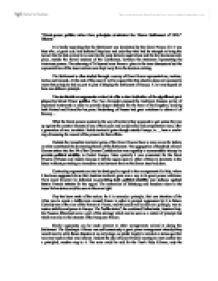 &quot;Great-power politics rather than principles dominated the Vienna Settlement of 1915.&quot; Discuss

"Great-power politics rather than principles dominated the Vienna Settlement of 1915." Discuss It is hardly surprising that the Settlement was dominated by the Great Powers for it was they who, at great cost, had defeated Napoleon and only they who had the strength to bring the turmoil that he had created to an end. So the most delicate negotiations and the key decisions took place, outside the formal sessions of the Conference, between the statesmen representing the victorious powers. The scheming of Talleyrand won France a place in the inner discussions but the representatives of the lesser nations were kept away from the decision-making. The Settlement is often studied through a survey of Great Power representatives, motives, tactics and rewards. At the end of this essay it will be argued that this situation does not necessarily mean that principles had no part to play in shaping the settlement of Europe. A lot may depend on how one defines a principle. The territorial arrangements arrived at offer a clear indication of the significant part played by Great Power politics. ...read more.

Contrasting arguments can also be developed in regard to the arrangements for Italy, where it has been suggested above that Austrian territorial gains was a sop to its great power ambitions. They could however be defended as providing both political stability and defence against future French attacks for the region. The restoration of Habsburg and Bourbon rulers to the lesser Italian states could be seen in the same light. Play has been made of the notion, for it is scarcely a principle, that one intention of the Allies was to create a buffer-zone around France in order to prevent aggression by it in future. Certainly one of the aims of the Powers at Vienna, and this could well be seen as a principle, was to restore stability and peace to Europe. The "buffer states", the combined Netherlands, Austrian Italy, the Prussian Rhineland were a part of this strategy which can be seen as a matter of principle but which was also in the interests of the European Powers. ...read more.

That, and the later efforts at naval enforcement, are the other side of the coin to Britain's substantial colonial gains. In 1815 the great political ideas, or principles, for the future were those born in the previous revolutions and wars - that is liberalism and nationalism. At Vienna these were conveniently forgotten, ignored or suppressed. The suggestion that suppression was cynically and deliberately carried out on a large scale by the statesmen of the Great Powers gives to these new political forces an identity and a strength which in 1815 they did not possess. The statesmen, with Metternich pre-eminent amongst them, it can be argued, sought the restoration of older principles through the restoration of legitimate rulers to their possession and to protection of the interests of their subjects. Inevitably then, the Great Powers dominated the settlement and used to reward themselves for their efforts against Napoleon. This does not mean that their settlement was unprincipled, in the sense of being totally cynical, or that it was without any basis in principle even if that was only the search for stability, by the attempted restoration of the political arrangements which had characterized the 18th century. ?? ...read more.