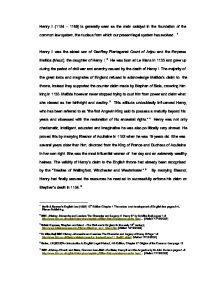 Henry II (1154 - 1189) is generally seen as the main catalyst in the foundation of the common law system, the nucleus from which our present legal system has evolved.

Henry II (1154 - 1189) is generally seen as the main catalyst in the foundation of the common law system, the nucleus from which our present legal system has evolved. 1 Henry II was the eldest son of Geoffrey Plantagenet Count of Anjou and the Empress Matilda (Maud), the daughter of Henry I.2 He was born at Le Mans in 1133 and grew up during the period of civil war and anarchy caused by the death of Henry I. The majority of the great lords and magnates of England refused to acknowledge Matilda's claim to the throne, instead they supported the counter claim made by Stephen of Blois, crowning him king in 1135. Matilda however never stopped trying to oust him from power and claim what she viewed as her birthright and destiny.3 This attitude undoubtedly influenced Henry, who has been referred to as "the first Angevin King said to possess a maturity beyond his years and obsessed with the restoration of his ancestral rights."4 Henry was not only charismatic, intelligent, educated and imaginative he was also politically very shrewd. He proved this by marrying Eleanor of Aquitaine in 1152 when he was 19 years old. She was several years older than him, divorced from the King of France and Duchess of Aquitaine in her own right. She was the most influential woman of her day and an extremely wealthy heiress. The validity of Henry's claim to the English throne had already been recognised by the "Treaties of Wallingford, Winchester and Westminster."5 By marrying Eleanor, Henry had finally secured the resources he needed to successfully enforce his claim on Stephen's death in 1154.6 Henry inherited a country that had been divided by civil war and unrest for nearly 20 years. In Henry however, the people had a king who understood the need for effective, stable government, who possessed a flair for administration and the commitment to carry through the changes he deemed necessary to achieve his goal i.e. ...read more.

the growing jurisdiction of the ecclesiastical courts (the publication of the "Decretum Gratiani" and the increased study of the canon law had made them very popular) was an obstacle in his way. Indeed Henry II knew and sensed something had to be done in order to limit the church's power, especially if he was to restore and maintain a good governmental and judicial system. Furthermore, Henry II had become dismayed and angry that the church continued to 'prosper and weald power. Arguably, Henry Ii no doubt believed he had been very shrewd and deviousness to appoint � Beckett as Archbishop of Canterbury, however Henry failed understand or consider that once appointed � Beckett would in fact bite the hand that had placed in a position of great power. In truth Henry tactics had well and truly back fired upon him since � Becket, knew Henry II to well and what lengths Henry would go to in order to get what Henry II considered was rightfully his by birth right. Indeed, � Becket had been correct to suspected that Henry II was deliberately striking at the privileges of the Church, whereby Henry's approach of obtaining a promise was extorted from the bishops in order to observe the "avit� con suetudines" before anyone knew what these were, as well as the pretence that the 'Constitutions of Clarendon' as being a mere representation of nothing more than the customs laws said to have been observed during the era of Henry I, does not leave the impression of straightforward dealing. Therefore, it could be suggested that in hinge sight � Beckett was indeed just to have stood in defiance against a King whose critics and own family saw him as a tyrant who rules his lands with a talon's grasp. Alternatively, academics like Stubbs79 portray Henry II as 'a far-seeing King who recognized that the well-being of the nation was the surest foundation of his own power'. ...read more.