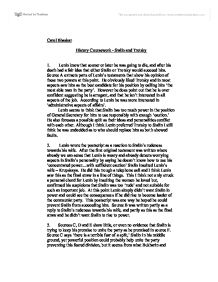 Carol Bhaskar History Coursework - Stalin and Trotsky 1. Lenin knew that sooner or later he was going to die, and after his death had a fair idea that either Stalin or Trotsky would succeed him. Source A extracts parts of Lenin's testaments that show his opinion of these two powers at this point. He obviously liked Trotsky and in most aspects saw him as the best candidate for his position by calling him 'the most able man in the party'. However he does point out that he is over confident suggesting he is arrogant, and that he isn't interested in all aspects of the job. According to Lenin he was more interested in 'administrative aspects of affairs'. Lenin seems to think that Stalin has too much power in the position of General Secretary for him to use responsibly with enough 'caution.' He also foresees a possible split as their ideas and personalities conflict with each other. Although I think Lenin preferred Trotsky to Stalin I still think he was undecided as to who should replace him as both showed faults. 2. Lenin wrote the postscript as a reaction to Stalin's rudeness towards his wife. After the first original testament was written where already we can sense that Lenin is weary and already detects worrying aspects in Stalin's personality by saying he doesn't know how to use his 'concentrated power....with sufficient caution' Stalin insulted Lenin's wife - Krupskaya. ...read more.

Both Stalin and Trotsky have there counterparts, Stalin being represented by Napoleon, and Trotsky by Snowball. Stalin's ideas on how the country should be run where called 'socialism in one country'. He thought that Russia should work within the country to create a socialist society that was strong enough to defend itself as described in source H. This was because he believed that if the country could not support itself it would have no hope as it could not function independently. Trotsky however had completely different ideas, he thought that if they spread working-class revolution throughout neighbouring countries then they would have many allies and would be safe that way (described in source G). Looking back now to source I we can see that these ideas are represented here. Napoleons thoughts that the animals should 'get firearms and train themselves in the use of them' echoes Stalin's idea of the ' working class taking power' and that they 'do not need the working class revolution in other countries.' However 'According to Snowball, they must send out more and more pigeons and stir up rebellions amongst the animals on other farms', this mirrored Trotsky's view that revolution should be encouraged in other countries because 'without direct support of the European working class [they] cannot remain in power'. ...read more.

In sources G and H the difference between Trotsky's and Stalin's ideas is plain. As I have just said the more practical of the 2 ideas is Stalin's. This is because to they were a lot more appealing to people, they were less dangerous and had a more definite outcome. Trotsky's ideas had more scope to flop - if revolutions didn't happen in other countries then Russia would be in big trouble. Stalin's only depended on people working and could be introduced more gradually. Other factors also helped Stalin, Lenin's testament wasn't published. If had have been Stalin would have been seriously set back as the testament contained strong criticism of him, saying he was 'too rude' and that they should 'remove Stalin from that position'. The fact that wasn't published (because it contained criticism of other leading communists who didn't want that to be seen) helped him greatly. Still Stalin's ideas were practical, I think that many other things played a big part in his success, and he did seem to have an overriding interest 'in increasing his own power.' However I definitely feel that Stalin was a practical man and that his ideas being more practical than Trotsky's helped him but it was not solely this that won him power. ...read more.