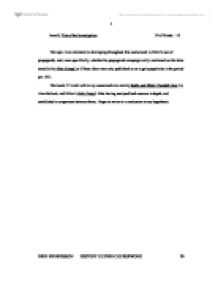 Hitler's use of propaganda.

bancA) Plan of the Investigation N�of Words: 110 The topic I am interested in developing throughout this coursework is Hitler's use of propaganda, and, more specifically, whether his propaganda campaign really was based on the ideas stated in his Mein Kampf, or if these ideas were only published so as to gain popularity in the period pre 1933. The books I'll work with in my coursework are mainly Stalin and Hitler: Parallel Lives, by Alan Bullock, and Hitler's Mein Kampf. After having analysed both sources in depth, and established a comparison between them, I hope to arrive at a conclusion to my hypothesis. B) Summary of Evidence N� of Words: 650 Political parties, organizations and nations throughout History have used propaganda1 to gain support for an idea or action. The most powerful and productive uses of propaganda ever seen were those of the Nazi Party and latter Nazi-controlled Germany. The Nazis used propaganda at varying degrees throughout their history with horrifying results. They used propaganda at the beginning to gain support from German people to obtain power and later, promote the idea of German expansion, war and eventually the Holocaust.2 Hitler grew aware of the importance of propaganda in the political field early in his life in pre World War I Vienna, where many of his ideas were developed. During Germany's campaign in World War I, he saw the effects of propaganda on the German people when he was introduced to the DAP3 in 1913 in Munich. ...read more.

D) Analysis N� of Words: 650 After World War One, and in the beginning of the 1920's, Germany was going through her worst economic crisis ever since her unification in 1870. In the early years of the Weimar Republic, several attempts to seize power took place, both from right (Freikorps) and left-wing (Spartacists) groups. One of the many parties created during this period was the Deutsche Arbeit Partei (DAP)11, while its most important member ever joined the party in September as propaganda chief: Adolf Hitler, who soon started climbing positions in the party owing to his abilities as orator. 12By the year 1923 he was already known all over the country as one of the leaders of the right wing opposition to Gustav Stresseman13. Hitler saw the time had come for him to seize power, and on November 8, with 600 armed storm troopers, he marched on a beer hall in Munich, at which Gustav von Kahr, head of the provincial Bavarian government, was addressing a public meeting. Hitler, declared the formation of a new national government14. Following a brief struggle with the Munich police on November 9, Hitler and his associates fled, and the so-called "Beer Hall putsch" failed. Hitler and Ludendorff were subsequently arrested. The latter went unpunished, but Hitler was tried and received a five-year prison sentence, and the party was outlawed. 15 While in prison, Hitler dictated the first volume of Mein Kampf 16. ...read more.

to make repeated incursions into the Roman Empire during the 4th and 5th centuries AD. These attacks culminated in a series of wars under Attila, the most renowned of its leaders, that brought both parts of the Roman Empire, East and West, to the verge of destruction 7 When horrific weapons were turned upon them, they saw this as proof of the Huns' barbarity and as justification for their own use of similar weapons 8 Hitler, Adolf .Mein Kampf. Ed. Levinson. Madrid, 1944. pages 78-79 9 Ibid 7. pages 81, 256-7. 10 Paraphrasing Hitler, Adolf .Mein Kampf. Ed. Levinson. Madrid, 1944. Chapters 6-23. 11 It was created on January 9th, 1919 12 http://www.thehistorychannel.co.uk/classroom/gcse/facis.htm 13 Gustav Stresemann (1878-1929). German Chancellor (1923) and foreign minister (1923, 1924-29) of the Weimar Republic, largely responsible for restoring Germany's international status after World War I. With French foreign minister Aristide Briand, he was awarded the Nobel Peace Prize in 1926 for his policy of reconciliation and negotiation. 14 He did it abetted by General Erich Ludendorff and in Von Kahr's name, taking him and his associates prisoners. However, von Kahr was released soon after, turning against Hitler and Ludendorff. 15 Shirer, William L. 1990.The Rise and Fall of the Third Reich. Simon & Schuster. New York. Pages 67-8. 16 After its release, he continued with a second volume. 17 Lowe, Norman. Mastering Modern World History. Second Edition. MacMillan. London, 1988. Page 254 18 Walsh, Ben. Modern World History. John Murray. London, 1999. Page 72 19 National Geographic Magazine, April 1999. Vol. 195, N�4. 1 ERIK HENRIKSSON HISTORY GUIDED COURSEWORK IB ...read more.