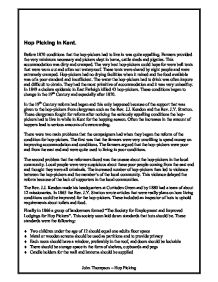 Hop Picking In Kent. Before 1870 conditions that the hop-pickers had to live in was quite appalling. Farmers provided the very minimum necessary and pickers slept in barns, cattle sheds and pigsties. This accommodation was dirty and cramped. The very best hop-pickers could hope for were bell tents that were worn out and often not waterproof. These tents were shared by eight people and were extremely cramped. Hop-pickers had no drying facilities when it rained and the food available was of a poor standard and insufficient. The water the hop-pickers had to drink was often impure and difficult to obtain. They had the most primitive of accommodation and it was very unhealthy. In 1849 a cholera epidemic in East Farleigh killed 43 hop-pickers. These conditions began to change in the 19th Century and especially after 1870. In the 19th Century reform had began and this only happened because of the support that was given to the hop-pickers from clergymen such as the Rev. J.J. Kendon and the Rev. J.Y. Stratton. These clergymen fought for reform after noticing the seriously appalling conditions the hop-pickers had to live in while in Kent for the hopping season. ...read more.

These included an inspector of huts to uphold requirements about toilets and food. Finally in 1866 a group of landowners formed "The Society for Employment and Improved Lodgings for Hop Pickers". This society soon laid down standards that huts should be. These standards were the following: * Two children under the age of 12 should equal one adults floor space * Metal or wooden screens should be used as partitions and to provide privacy * Each room should have a window, preferably in the roof, and doors should be lockable * There should be storage space in the form of shelves, cupboards and pegs * Candle holders for the wall and lanterns should be supplied * To maintain discipline bin men would be appointed to take responsibility for damage or loss * One oven for every 12 families * Straw filled hop pokes would be used as mattresses instead of straw Although these recommendations were good the farmers did not always follow them. In 1872 the Local Government Board discovered that the accommodation available to hop-pickers was still quite poor. Some laws had already been passed and this gave local authorities power to improve conditions. ...read more.

In 1926 the Minister of Health bought in new model by-laws to raise conditions on certain aspects but not overcrowding or disease. Voluntary workers assisted the hop-pickers by helping with welfare and medicine. which was extremely important before the introduction of the Welfare State. The hopper huts the hop-pickers had to live in were slowly being improved. Windows began to appear which added to the cost of construction but were needed. These widows generally were small slits in the huts that could be blocked at night. By 1920's straw mattresses and linen mattress covers were quite often used. After 1945 there was the introduction of surplus army beds or old Anderson Shelter beds. This was an improvement of the straw filled pokes that hop-pickers used to sleep on. Throughout the Second World War the Londoners showed what they were made of, they continued to pick hops through the battle of Britain when the hop fields were often targets to the German bombers. During the Battle of Britain German planes were know to have been shot down over the hop fields so sections of infantry were there to reassure the hop-pickers. John Thompson - Hop Picking ...read more.