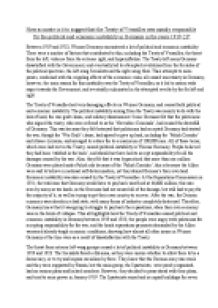 ﻿How accurate is it to suggest that the Treaty of Versailles was mainly responsible for the political and economic instability in Germany in the years 1919-23? Between 1919 and 1923, Weimar Germany encountered a lot of political and economic instability. There were a number of factors that contributed to this, including the Treaty of Versailles, the threat from the left, violence from the extreme right, and hyperinflation. The Treaty left many Germans dissatisfied with the Government, and eventually led to attempted revolutions from the far sides of the political spectrum; the left-wing Socialists and the right-wing Nazi. Their attempts to seize power, combined with the crippling effects of the economic crisis, all caused uncertainty in Germany; however, the main reason for this instability was the Treaty of Versailles, as it led to nation-wide anger towards the Government, and eventually culminated in the attempted revolts by the far left and right. The Treaty of Versailles had very damaging effects on Weimar Germany, and caused both political and economic instability. The political instability arising from the Treaty was mainly to do with the loss of land, the war guilt clause, and military disarmament. Some Germans felt that the politicians who signed the treaty, who were referred to as the ?November Criminals?, had caused the downfall of Germany. ...read more.

If the army had not been weakened, the military presence would probably have stopped the Socialists from trying to cause trouble, thus illustrating how the Treaty of Versailles was the main reason for political instability at this time. The Nazi?s on the far-right of the political spectrum also contributed to political and economic instability from 1919 to 1923. In 1920, many Free Corps units had to be disbanded, because the Treaty of Versailles limited the size of the army. This was despite the fact that the Defence Minister, Noske, had previously promised to keep the units in place, and merge them with the regular army. The Erhardt Brigade, worked Kapp and Luttwitz, moved several units into position, and planned to take Berlin by force, and declare a revolution. The Government asked the army for help, but they refused to attack other soldiers, and initially, the putsch appeared to be working. However, poor organisation led to its collapse, along with several strikes by civil servants which brought the city to a standstill. This caused political instability as it highlighted how the Government, despite being in power, could not rely on the army for support. This meant that in the result of an Allied attack or any other internal disturbances, there was no guarantee that the army would be willing to protect the Government. ...read more.

This caused a loss of support for the Weimar Government, as people now began to look at other political alternatives. The economic instability caused by the hyperinflation was obvious to see. The currency lost its value, so people who had savings in the bank lost all of their money, whilst firms had to lay off workers in an attempt to stay in business, leading to rising unemployment as well. Despite all of these issues, hyperinflation was not the main cause of instability; the Treaty of Versailles imposed reparations repayments on Weimar Germany. Therefore, had the Treaty not been in place, Germany would not have experienced such massive inflation, and the economy would remain relatively stable. Also, people?s faith would have remained in the Government, as they would not have become frustrated about losing all of their money. In conclusion, there were many causes of political and economic instability in Weimar Germany between 1919 and 1923. These included the left-wing threat, the potential revolutions from extreme right-wing parties, and hyperinflation. However, the Treaty of Versailles is without doubt the most significant reason for political and economic issues during this period. This is because the terms of the Treaty, such as the ?war guilt? cause, reparations payments and the loss of Germany territory, all angered other political groups, which ultimately caused the attempts by them to seize power. ...read more.