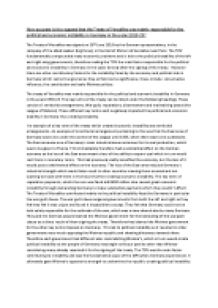 The Saar area was one of Germany?s main industrial areas notorious for its coal production, which was to be given to France. This immediately therefore had a substantial affect on the German economy as the loss of the Saar area meant a loss of the ability to export coal which in turn would cost them in monetary terms. This had previously vastly benefited the economy, but the loss of it would pose a detrimental effect on the economy. The loss of the Saar area reduced Germany?s industrial strength which would later result in other countries viewing them as weak and not wanting to trade with them in the future further creating economic instability. ...read more.

This led to political instability as it resulted in other governments very much opposing the Weimar republic and showing bitterness towards them. Therefore each government had different aims contradicting Weimar?s, which in turn would create political instability as the people of Germany may begin to favour parties other than Weimar considering many already resented it for the signing of the treaty. The TOV was the main factor contributing to instability and was the fundamental cause of the difficulties Germany experienced. It ultimately gave Weimar?s opponents strength to undermine the republic creating political instability. The right posed a threat to stability in Germany in the years 1919-23. The right was made up of the DNVP, Nationalist splinter parties, the Freikorps and the Consul organisation. The TOV terms mainly contributed to the economic instability faced by Germany however there were other underlying problems. For example the government printed ...read more.