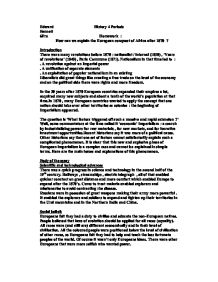 How can we explain the European conquest of Africa after 1870 ?

Edward History 4 Periods Bennett 6Fra Homework : How can we explain the European conquest of Africa after 1870 ? Introduction There were many revolutions before 1870 : nationalist / internal (1830) , 'Years of revolutions' (1848) , Paris Commune (1871). Nationalism in that time led to : . A revolution against an Imperial power . A unification of separate elements . An exploitation of popular nationalism in an existing Liberalists did great things like creating a free trade on the level of the economy and on the political side there were rights and more freedom. In the 30 years after 1870 European countries expanded their empires a lot, acquired many new subjects and about a tenth of the world's population at that time.In 1870 , many European countries wanted to apply the concept that one nation should take over other territories as colonies : the beginning of Imperialism appeared. The question is 'What factors triggered off such a massive and rapid extansion ?' Well, some commentators at the time called it 'economic' imperialism : a search by industrialising powers for raw materials , for new markets, and for lucrative investment opportunities.Recent historians say it was more of a political cause. Other historians say that one set of factors cannot satisfactorily explain such a complicated phenomenon. It is clear that this new and explosive phase of European imperialism is a complex case and cannot be explained in simple terms. ...read more.

An American Historian, Profesor Hayes, argued in A Generation of Materialism (1871-1900) that the new imperialism was a nationalistic phenomenon. It created a very powerful Germany and a united Italy, which carried Russia out of sight of Constantinople, and left England fearful and France eclipsed. The French government was encouraged by Bismarck to expand in north and west Africa because (as Prime Minister Gambetta declared) 'France is recovering her position as a great power and to avoid officers getting officers under the command of Boulanger who wanted absolutely revenge against Germany in Europe. Historian A. J. P. Taylor says that Bismarck colonial claims/disputes were used to increase Anglo-French rivalry and at the same time promote the possibility of a Franco-German entente on colonial issues.Other historians thought that Bismarck's bid for colonies was a respones to a variety of domestic pressures. Political factors: the challenge of Germany The entry of Germany into the colonial arena in the period 1884-5 injected a new element of rivalry. European countries wanted more territories. People thought Bismarck's attitude was strange, as he said in 1881 that ' As long as I am Imperial Chancellor we shall not pursue a colonial policy' and then in 1884 he launches a bid for colonies. He was maybe making a plot. People shared Taylor's view s that Bismarck was seeking to protect Germany's position in Europe and his alliance system. ...read more.

This made a 'chain reaction' of rivalries and of annexations which spread to west Africa and further south. Britain really wanted to keep South Africa to safeguard the naval base and sea routes and east Africa for strategic reasons only. Many historians have argued that economic imperialism did increase competition after 1870 and inflame international rivalries. The opposing view has been put forward that colonial disputes acted as a 'safety valve' for European rivalries, rather than intensifying them, and as the powers applicate their ambitions on Africa or Asia , the likelihood of a serious war diminished .France, Russia, Britain in the early 20th century , indeed at that moment it was the consequent emergence of the 'Triple Entente' between those countries that increased the danger for war because the Germans got alarmed. Conclusion I think that this chapter highlights the many different elements which were involved in the European expansion of Africa after 1870. There were undoubtedly major forces at work which enabled a handful of powers to divide up so much of the globe by 1900. The results of this late 19th imperialism profoundly influenced international relations in the 20th century and at the same time increased rivality between the great powers . To me, all of this was the result of the first World War which was completely inevitable. People should have seen war coming as the countries were in a struggle for colonial expansion in Africa. ...read more.