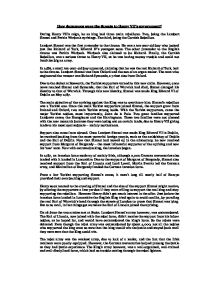 How dangerous were the threats to Henry VII's government?

How dangerous were the threats to Henry VII's government? During Henry VII's reign, he as king had three main rebellions. Two, being the Lambert Simnel and Perkin Warbeck uprisings. The third, being the Cornish Rebellion. Lambert Simnel was the first pretender to the throne. He was a ten-year-old boy who looked just like Richard of York, Edward IV's youngest sons. The other pretender to the English throne was Perkin Warbeck. Warbeck also claimed to be Richard. Finally, the Cornish Rebellion, was a serious threat to Henry VII, as he was having money trouble and could not fund that big an army. In 1486, a small ten-year-old boy appeared, claiming that he was the real Richard of York, heir to the throne. Lambert Simnel was from Oxford and the son of an organ maker. The man who engineered the rumour was Richard Symonds, a priest also from Oxford. Due to the defeat at Bosworth, the Yorkist supporters turned to this new claim. However, once news reached Simnel and Symonds, that the Earl of Warwick had died, Simnel changed his identity to that of Warwick. Through this new identity, Simnel was made King Edward VI of Dublin on May 1487. The main objective of the uprising against the King was to overthrow him. Simnel's rebellion was a Yorkist one. Once the main Yorkist supporters joined Simnel, the support grew from Ireland and Oxford, two main Yorkist strong holds. With the Yorkist supporters, came the major Yorkist nobles, most importantly, John de la Pole. ...read more.

Through out the time Henry was trying to stop Warbeck's rebellion, Henry signed two treaties, the Treaty of Etaples with France, and then signed a truce with Scotland. He then gained a marriage between his daughter and King James of Scotland. The main reason why Henry managed to stop the rebellion was because he improved his relationship between England and Ireland. Ireland, France, Scotland and England were now loyal or friends towards to the King and Warbeck soon found that he wasn't going to receive any new support when he landed in Ireland and then South West England. The organisation of Warbeck's army and rebellion was a very messy one. He travelled from country to country trying to gain support, moving on once he was successful. Once he had that support he eventually landed in Danes, but the army was not a battle hardened one, and the local militia soon defeated it, even before the royal army arrived. Warbeck then fled with the surviving army and again was defeated trying to conquer part of Ireland. The only real battle hardened men in Warbeck's army were the small number of retainers provided by the small number of Yorkist supporters. But once the King of Scotland had provided some men, these were the only real fighters in the rebel's army. In 1497, Warbeck was persuaded to give himself up. However, Henry couldn't convict him of treason as Warbeck was born in Flanders, so Henry allowed him to live. In 1498 Warbeck escaped from Henry's court, but Henry soon found him and put him in the Tower. ...read more.

Warbeck did gain support from England's main foreign enemies. Henry showed that he had learnt from Simnel's uprising, and combated the situation quickly and effectively. As Warbeck gained support from the countries, Henry managed to get treaties signed with those countries which then in turn made the support to Warbeck in valid. Even in Ireland where Simnel received most of his support, Warbeck received none. The time since Simnel, Henry had worked on the support of Ireland, so the same wouldn't happen again. When Warbeck landed in Danes, the local militia drove them out. The reason probably being that the local people were probably sick of fighting and rebellion as the last 50 years had been the conflict of the Wars of The Roses. Warbeck landed to late in Cornwall to gain support as the Cornish rebellion had happened a few months earlier and the Cornish were probably also fed up with conflict and drove him out of the South West. King Henry VI had learned some lessons since the first uprising, and so once Perkin Warbeck appeared Henry soon managed to combat the problem with ease and Warbeck was soon captured and eventually executed. But through Henry's reign his throne and government was at risk. The conquering of the two events (Lambert Simnel and the Cornish Rebellion) was not due to the loyalty from the main nobles or from the influence he had over England but due to him assembling a much larger force than those who were attacking. However, Warbeck was defeated by partly the new loyalty from the Kings subjects especially because of the attitude of Ireland and the attitude of England's population at the time ...read more.