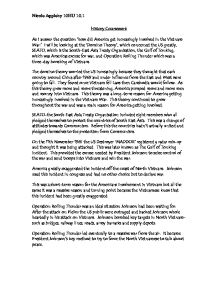 'How did America get increasingly involved in the Vietnam War.'

History Coursework As I answer the question 'how did America get increasingly involved in the Vietnam War.' I will be looking at the 'Domino Theory', which concerned the US greatly, SEATO, which is the South-East Asia Treaty Organisation, the Gulf of Tonking, which was Americas excuse for war, and Operation Rolling Thunder which was a three-day bombing of Vietnam. The domino theory worried the US increasingly because they thought that each country around China after 1949 and under influence from the East and West were going to fall. They feared once Vietnam fell Laos then Cambodia would follow. As this theory grew more and more threatening, America pumped more and more men and money into Vietnam. This theory was a long-term reason for America getting increasingly involved in the Vietnam War. This theory continued to grow throughout the war and was a main reason for America getting involved. SEATO-the South East Asia Treaty Organisation included eight members who all pledged themselves to protect the countries of South East Asia. This was a change of attitudes towards Communism. Before this the countries hadn't actually united and pledged themselves to the protection from Communism. On the 11th November 1965 the US Destroyer 'MADDOX' registered a radar mix-up and thought it was being attacked. ...read more.

Kennedy wanted people to think he was tough on Communism but he didn't want to send in American troops so he raised the amount of military experts training and paid for a further 20,000 troops for the ARVN. In 1961 the USA spent nearly $270 million in military support for Diem. This shows that America were very keen to get rid of Communism but they were not prepared to send their own troops, however eventually America realised Diem was too unpopular. When President Johnson first came to power he knew little about Vietnam and used the method of 'continue our present policy' option. This at the time was a sensible idea however by May 1964 Johnson thought that 'the biggest damn mess I ever saw' was Vietnam. He went on to tell a close adviser 'I don't think it's worth fighting for and I don't think we can get out.' In the next couple of months he learned about the mess America and Vietnam were involved in and opted for a new more dangerous option. The first of which was on the 5th August 1964 when the incident of the Gulf of Tonking took place. Johnson wanted full support from the American electorate before going ahead with his plans to defeat the Vietcong and the North Vietnamese. ...read more.

The South Vietnamese army wouldn't fight for their country and the Guerrillas ruled the countryside. The USA had to get out or take control and win the war. In conclusion America from the start of conflict was determined not to lose to anyone or to lose face to the USSR. As they became more involved they had to commit more and more and dug themselves into a hole. The main reason for America getting involved was the persistence of the presidents who wouldn't or couldn't back down as the whole world's eyes were on them and would fight communism to the extreme. The Geneva agreement angered the American's greatly because they thought the French were giving in too easily. They also didn't want to lose pride. The American's even refused to play a leading role in the negotiations. The USA and the South Vietnamese decided not to sign the agreement but assured the North Vietnamese and France that they would try to go by its rules. This proved that ever so slowly the USA were losing grip of the situation. This made the USA more determined to fight the war against communism As the table below shows America evidently pumped more men in over the years and backs up all points shown in this essay. YEAR NUMBER OF TROOPS 1962 9000 1963 15000 1964 16000 1965 60000 1966 268000 1967 449000 1968 535000 1969 415000 Nicole Appleby 10HU 10.1 ...read more.