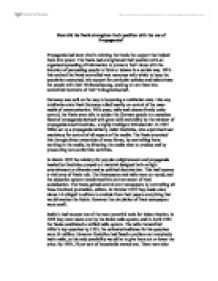 How did the Nazis strengthen their position with the use of Propaganda?

How did the Nazis strengthen their position with the use of Propaganda? Propaganda had been vital in winning the Nazis the support that helped them into power. The Nazis had strengthened their position with an organised spreading of information to promote their views with the intention of persuading people to think or behave in a certain way. With this method the Nazis controlled vast resources with which to keep the population contented, win support for particular policies and indoctrinate the people with their Weltanschauung, seeking to turn them into committed members of their Volksgmeinschaft. Germany was well on the way to becoming a totalitarian state. Like any totalitarian state Nazi Germany relied heavily on control of the mass media of communication. ...read more.

In March 1933 the ministry for popular enlightenment and propaganda headed by Goebbles pumped out material designed both as light entertainment or diversion and as political doctrination. This had become a vital prop of Nazis rule. The Newspapers and radio were co-opted, and the education system transformed into an instrument of Nazi socialisation. The Nazis gained control over newspapers by controlling all those involved, journalists, editors. In October 1933 they made a law clause 14 obliged to editors to exclude from their papers everything that would weaken the Reich. However the circulation of Nazi newspapers were small. Radio's had become one of the most powerful tools for indoctrination. In 1933 they were taken over by the Reich radio system, and in April 1934 the Nazis established a unified radio system. ...read more.

Posters were cheap and easy which meant there was constant repetition on posters. A range of social organisations, such as Hitler Youth {HJ} and the league of German girls {BDM}, and the Nazi women's organisations, sought to incorporate different sections of society into the new community, while the multiplicity of pre-existing German organisations were outlawed, dissolved, or taken over by the Nazis. The notion of a regenerated national community under the saviour figure of Adolf Hitler was further propagated by symbolic displays of power and unity, through the mass rituals, parades and depiction. In conclusion The Nazi had strengthened their position with overall support for Hitler and the regime with the use of propaganda through radio broadcasts, posters, cinema and other forms such as communal loudspeakers and formation of various forms of social organisations ...read more.