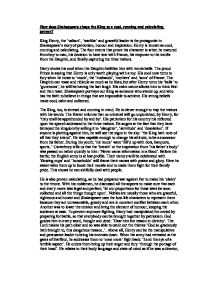 How does Shakespeare shape the King as acool, cunning and calculating person?

How does Shakespeare shape the King as a cool, cunning and calculating person? King Henry, the 'valiant', 'warlike' and graceful leader is the protagonist in Shakespeare's story of patriotism, honour and inspiration. Henry is known as cool, cunning and calculating. The four events that prove his character is when he matured from boy to man, his decision to have war with France, his response to the insults from the Dauphin, and finally capturing the three traitors. Harry shows his cool when the Dauphin belittles him with tennis balls. The proud Prince is saying that Henry is only worth playing with a toy. His cool now turns to fury when he vows to 'mock', the 'husbands', 'mothers' and 'sons' of France. ...read more.

If anyone is plotting against him, he will see the signs in the sky: 'the King hath note of all that they intend'. He was capable enough to change his attitude, to be a successor from his father. During his youth; 'his hours' were 'fill'd up with riots, banquets, sports..' Canterbury tells us that the 'breath' or the inspiration from 'his father's body' was passed on rather quickly to him: 'Never came reformation in a flood'. Before the battle; the English army is at low profile. Their victory will be celebrated with 'flowing cups' and 'households' will frame their names with praise and glory. Here he sweet-talks them up to boost their morale and to make them fight for their family pride. ...read more.

Above all, Henry can be the manipulative and persuasive leader to bring his enemies down. When his army had retreated at the gates of Harfleur, he addresses them to 'once more' fight back: 'Lend the eye of a terrible aspect'. He orders them bring up their anger and fury 'through the portage of their head'. He relates to their body language and state of mind as if he was a director, in a film, who wants them to perform their ultimate best. That shows that he is a cunning 'tactician' who knows his bad marks and is able to checkmate. Shakespeare creates this character to be very inspirational to the people of England. Shaping him to be calm with his friends and decisive to his enemies. He is the 'strawberry' that grows 'underneath the nettle'. He could be poisonous and sharp but fruitful and gracious. ...read more.