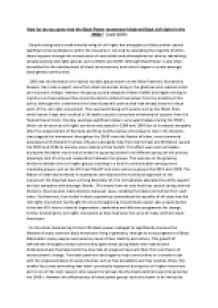 How Far Did Black Power Hinder Civil Rights In The 1960s?

﻿How far do you agree that the Black Power movement hindered Black civil rights in the 1960s? (June 2009) Despite being only a small minority wing of civil rights the emergence of black power caused significant internal divisions within the movement, not only by alienating the majority of white liberal support through the introduction of new beliefs and philosophies but also by radicalising already existing civil rights groups such as SNCC and CORE. Although Black Power is also often accredited for the development of black consciousness, and unity it began to create amongst black ghetto communities. 1966 saw the formation of a radical socialist group known as the Black Panthers, founded by Newton their main support came from black Americans living in the ghettoes who wanted social and economic change. ...read more.

This effect was most noticeable during the Meredith march which ended in opposing chants from different groups of the protest, showing a lack of unity and cooperation between the groups. This was due to the growing divisions between the civil rights groups resulting in a lack of communication among more moderate groups such as the SCLC and NAACP and more extreme groups like SNCC and CORE. The Nation of Islam also believed in separatism and rejected the multiracial approach to the movement the King had been a strong advocator of; this immediately alienated the white support and lost sympathy with amongst liberals. This shows that not only had they caused strong internal divisions, they had also made divisions between races, isolating the blacks and whites from each other. Furthermore, their belief in black supremacy contradicted the equality of all races that the civil rights movement has fought for since its beginning. ...read more.

However the effectiveness of black power groups could be shown to be limited by external factors such as the FBI, whose persecution of groups like the black panthers is well-documented as they believed they were a terrorist threat they would often use the media to portray the group and its supporters as violent thugs in an effort to discredit their message. Overall the emergence of the black power movement not only caused significant internal divisions by introducing more radical views to the civil rights movement, but also alienated white support and lost white sympathy with the spread of their more militant beliefs. Although, the movement was also influential with the rise of black pride and culture and supporting communities with smaller social schemes to bring hope to many disillusioned northern black Americans. ...read more.