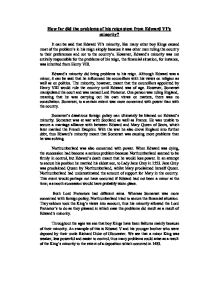 How far did the problems of his reign stem from Edward VI's minority?

How far did the problems of his reign stem from Edward VI's minority? It can be said that Edward VI's minority, like many other boy Kings caused most of the problem's in his reign simply because it was other men ruling the country to their preferences and not to the country's. However, Edward's minority was not entirely responsible for the problems of his reign, the financial situation, for instance, was inherited from Henry VIII. Edward's minority did bring problems to his reign. Although Edward was a minor, it can be said that he influenced his councillors with his views on religion as well as on politics. The minority, however, meant that the councillors appointed by Henry VIII would rule the country until Edward was of age. However, Somerset manipulated the court and was named Lord Protector. ...read more.

Northumberland had underestimated the amount of support for Mary in the country. This event would perhaps not have occurred if Edward had not been a minor at the time; a smooth succession would have probably taken place. Both Lord Protectors had different aims. Whereas Somerset was more concerned with foreign policy, Northumberland tried to secure the financial situation. They seldom took the King's views into account, thus his minority allowed the Lord Protector's to do as they pleased in which case the problems did result as a result of Edward's minority. Throughout the ages we see that boy Kings have been failures mainly because of their minority. An example of this is Edward V and his younger brother who were deposed by their uncle Richard Duke of Gloucester. We see that a minor King was weaker, less powerful and easier to control, thus many problems could arise as a result of the King's minority to the extent of a deposition which occurred in 1483. ...read more.

Whoever ruled England from 1547 to 1553 faced great problems of inflation, poor harvests, and the 'sweating sickness' that killed many thousands in 1551. It is evident that the King's minority cannot be held responsible for such uncontrollable things as disease and harvests. Somerset fell from power in 1549, despite this Edward remained in power. This is significant; it shows that in spite of Somerset's failure to secure his position as Lord Protector as well as the foreign and financial policy, people were loyal to their King thus his minority did not always cause problems. An adult King would have prevented trouble developing amongst his councillors. There would have been no rivalries over power. Clear policies would have also been established, whereas the changes and compromises of Somerset and Northumberland could have only improved the government. However, Edward's minority caused struggles over power, policies to the convenience and view of each councillor, and changes to suit each Lord Protector at the time, his minority seldom provided England with anything positive. ?? ?? ?? ?? ...read more.